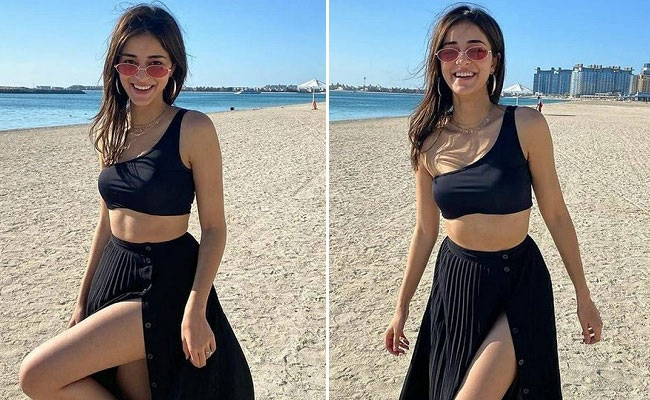 Ananya Pandey the Bollywood glam-doll is now acting in the Puri Jagannadh film ‘Fighter’ starring alongside Tollywood handsome hunk Vijay Deverakonda. The film is being shot at a fast pace in Mumbai but got stalled for now due to the pandemic.

The actress is enjoying her break time posting pics in stylish and traditional attires and is just giving a visual treat to her fans. Her latest pic in a black slit skirt on a sunny beach is just setting the temperature soar and is just sending hot chills to the fans across the nation.

Ananya Pandey is the new age Bollywood glam girl dreaming to make it big in Bollywood. She has made her Bollywood debut with Bollywood Biggie Karan Johar’s ‘Student Of The Year 2’ starring alongside Tiger Shroff. She later acted in ‘Pati Patni Aur Woh’ alongside Karthik Aryan and impressed the audience with her comic act and innocent looks in the film.