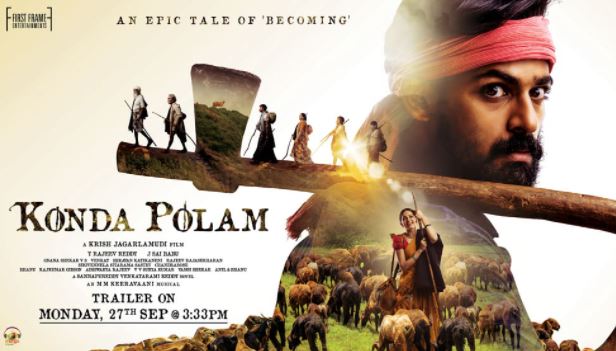 Tollywood young and promising hero, Panja Vaishnav Tej impressed all and sundry with his first movie, Uppena. Now, he is waiting for the release of his upcoming movie, Konda Polam. The movie is touted to be a message-oriented film and is directed by Krish Jagarlamudi.

For the first time, Rakul Preet Singh is seen with Vaishnav Tej in the movie. Bankrolled by Saibabu Jagarlamudi and Rajeev Reddy under the banner of First Frame Entertainments, the film is adapted from eponymous novel by Sannapureddy Venkata Rami Reddy. The movie is going to be released in theatres on 8 October 2021.

Now, the news is that the makers of the movie have announced that they are going to release the theatrical trailer of Konda Polam on September 27th at 3.33 PM. They released a poster and it is intense. In the poster, one could see Vaishnav Tej with an axe and he had a red coloured towel tied on his forehead. On the axe, one could see people walking and a hilly area. Rakul Preet Singh could be seen rearing her sheep with a smiling face. Decoding the poster, Vaishnav Tej might fight for the rights of the people and would help the people living in that hilly area. Once the trailer comes out, we may get an idea what the movie is all about. Let us wait for the trailer.