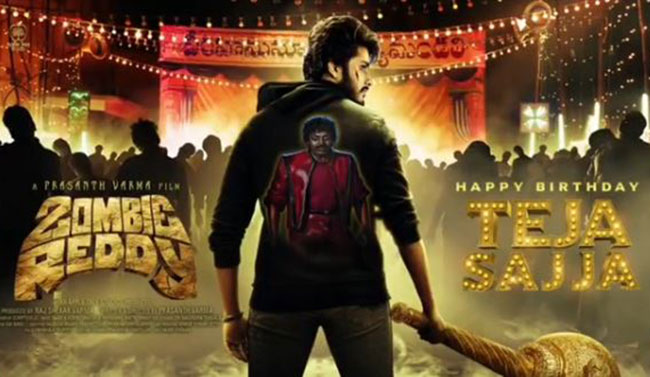 Young Director Prashanth Varma has impressed with his first film ‘Awe’ itself. The second film ‘Kalki’ was also appreciated for its quality. Now this young Director is making a film on Corona virus which has already completed 50 percent of its shoot and is titled ‘Zombie Reddy’ recently. On the latest, the movie team of ‘Zombie Reddy’ has released the first look motion poster of the lead actor of this film. It is none other than Jr Chiranjeevi, Teja Sajja (Indra Child Actor) debuting into Tollywood as a lead actor with this much anticipated film. The firstlook looked menacing with Teja holding a Club and is all set to fight the monsters but then the drama company name plate makes it a funny interpretation thats where the talent of Prashanth Varma holds you on guessing!

Recently news suggested that this young filmmaker is all set to make a sequel for his debut film ‘Awe’. In a media interaction, this talented filmmaker said that he got offers from Bollywood to remake ‘Awe’ in Hindi but he didn’t as he is preoccupied with other projects in Tollywood. He even said that his next film would be ‘Awe 2’ itself and confirmed that the scripting has already finished.

Prashanth Varma who is shifting genres for each film is gearing up all his strength to finish ‘Zombie Reddy’. He is the pioneer to shoot in this crisis time with utmost safety with big machines that spill sanitizer to the cast and crew.