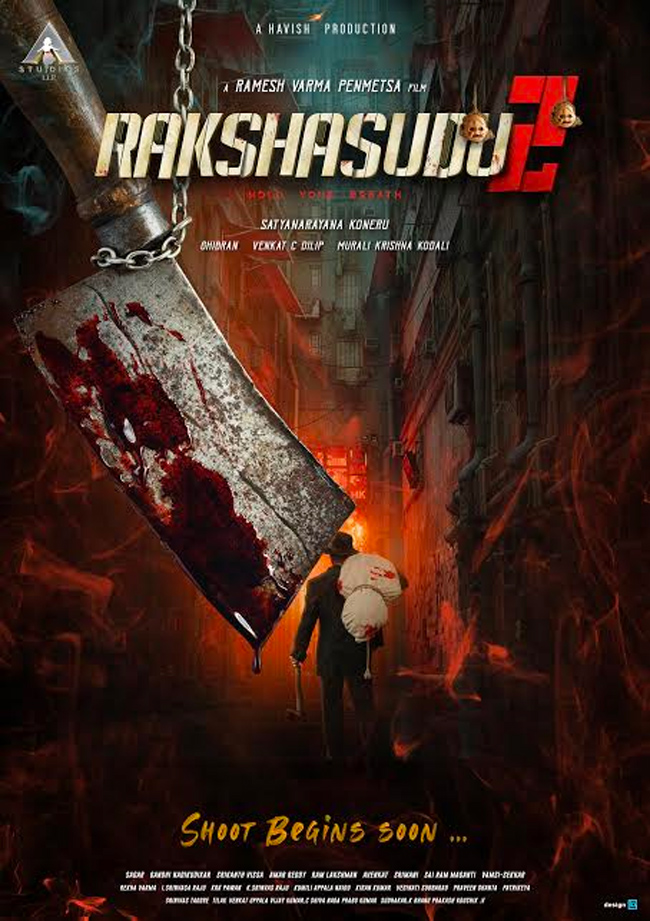 If there is any psycho mystery thriller that blew away the minds of the audience like never before in the past few years, it is ‘Ratsasan’. This Tamil film has been remade in Telugu as ‘Rakshasudu’ with action hero Bellamkonda Srinivas and cute girl Anupama Parameswaran in the lead. Ramesh Varma handled this remake which turned out to be a good hit.

Continuing the success, Ramesh Varma has worked with Mass Maharaj Ravi Teja on an action thriller named ‘Khiladi’ which is ready for release. While ‘Khiladi’ is waiting for the right time to hit the screens, director Ramesh Varma announced his next project and also unveiled the title poster of the same. With the tagline ‘Hold Your Breath’, the poster of ‘Rakshasudu 2’ was released. Since there is no ‘Ratsasan 2’ happening in Tamil, the Telugu sequel is going to have an original story. The shooting of this movie is going to commence shortly and the hero’s name isn’t revealed as of now. Sources say that a star hero will be featuring in this crime thriller.

Coming to the title poster, it has a gory and creepy vibe as we can witness a psychopath carrying a dead body over his shoulder and an axe in another hand. Also, we can see a meat-chopper knife can be seen hanged with a chain in the foreground. Set in a unique backdrop, the film is expected to be a mind-blowing thriller and the team hints that it is going to be intriguing, thrilling and chilling than ‘Rakshasudu’.

The main technical team who did a great job in the first film will be working on ‘Rakshasudu 2’ as well. Produced by Satyanarayana Koneru under ‘A Studios’ banner, Venkat C Dileep will be handling the camera. Ghibran will score the music and it is Rockstar DSP’s brother Sagar who will be penning the dialogues along with Srikant Vissa. Apart from directing the film, Ramesh Varma will be providing the story and screenplay as well. While the first part impressed the audience, the second part is bound to have a lot of expectations and hype around it. The makers promise it to be bigger than ‘Rakshasudu’. Let us see if it becomes successful or not.