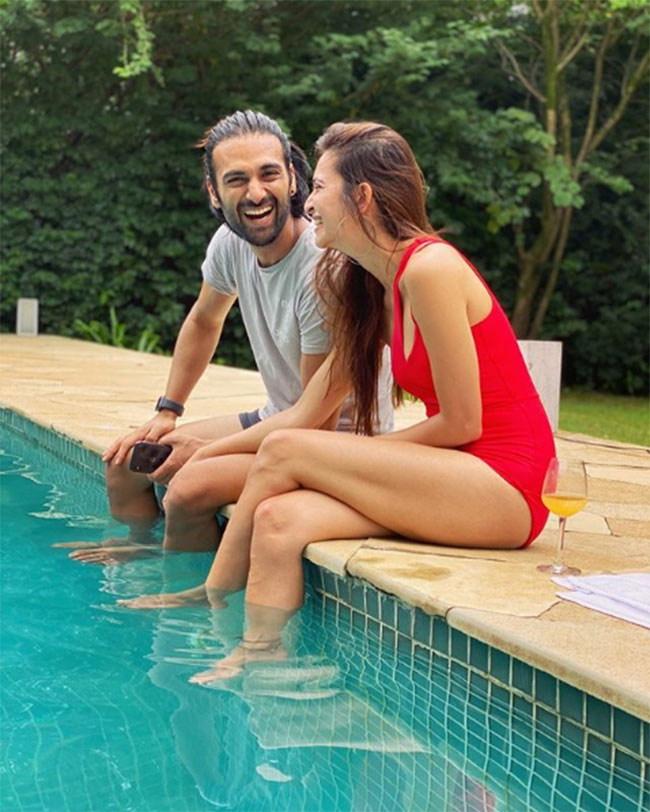 Adorable actress Kriti Karbanda who is known to Telugu audience with films like ‘Teenmaar’, ‘Ongole Gitta’ and ‘Mr.Nookayya’ has settled in Bollywood. She lifted her glamour gates after going to the North and she sizzled in many hit movies. Her last outing was ‘Housefull 4’ which was a huge hit.

The stunning beauty is known for her colourful pictures on Instagram and she soars up the temperatures quite regularly. The ‘Shaadi Mein Zaroor Aana’ actress is rumoured to be dating Hindi hero Pulkit Samrat for quite some time and they made it official during the lockdown. They both are living together and having a great time.

Recently, Pulkit uploaded a picture of both of them chilling happily by the poolside. You cannot take your eyes off of Kriti in this pic as she is seen in an irresistible red bikini.

They both are seen laughing wholeheartedly. Pulkit wrote, “Aaj blue hain paani paani paani paani” which is a lyric of Yo Yo Honey Singh’s hit song. The adorable couple is currently enjoying their relationship.