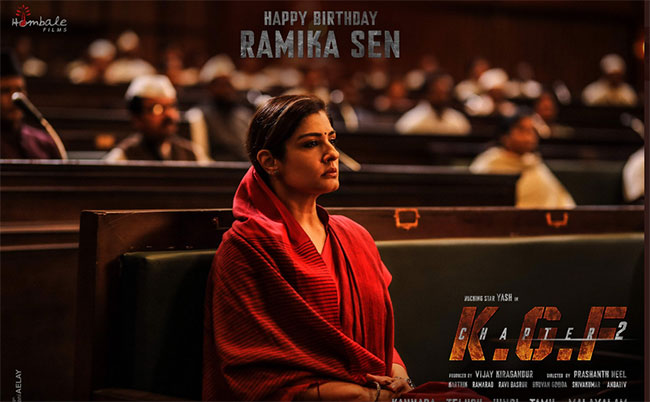 Stunning Bollywood actress Raveena Tandon who is a heartthrob of millions in the 90s is playing a very key role in the highly-anticipated pan-Indian project ‘KGF Chapter – 2’. On the occasion of her birthday, the team of ‘KGF’ released a special poster of hers.

Raveena Tandon will be seen as Ramika Sen in this film and the poster makes it clear that she is a politician. She is looking elegant and dignified in a red saree and the intensity in her eyes make it clear that her role is quite important in this film.

The actress who teased the youngsters with her beauty in ‘Tip Tip Barsa Pani’ back in the days is coming up with an important character in the second installment of ‘KGF’. Hope she impresses everyone. Apart from Raveena Tandon, another Bollywood biggie Sanjay Dutt is going to be seen as the main antagonist in this action drama.

Rocking star Yash is the hero in the ‘KGF’ series which is directed by Prasanth Neel. The film is releasing in Kannada, Telugu, Tamil, Hindi and Malayalam.