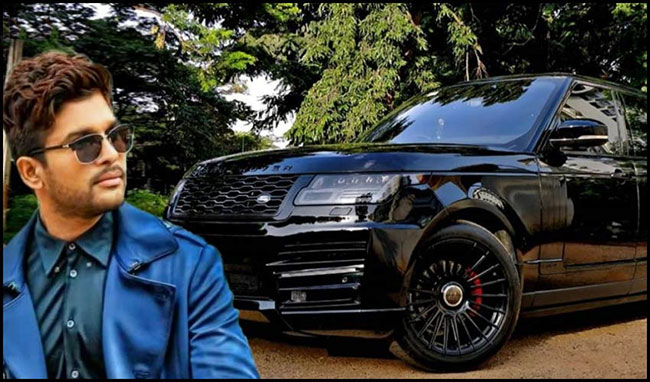 Allu Arjun, the stylish star of Tollywood still seems highly basking in the success of his Sankranthi hit film ‘Ala Vaikunta Puram Lo’.

Stylish star has pocketed a huge pay cheque and profit percentage for the film ‘Ala Vaikunta Puram Lo’ and was determined to make better the loss of staying idle for one and half year after the debacle of ‘Na peru Surya’ but the pandemic has shattered all the plans of this star as he might be idle for some more time and his upcoming film would hit the theaters only after Summer 2022.

The star is said to be busy with other things as usual and his luxury vehicle, the customised Land Rover Range Rover pics are flooding the Internet. His black beast was customised to suit his taste and added his signature AA on the alloy wheels to every part of the vehicle to show his luxury statement. The onlookers say that the vehicle itself costs around 2.5 Crores and the customisation could be a little more but the fans are happy with the luxury statement of the star! Allu Arjun also owns a custom vanity van which is said to be one of the best in Telugu Film Industry or Down South and no one strikes in Telugu stars for luxury statement just Allu Arjun!

The latest news is that Allu Arjun has used the crisis time to be fit and lost almost 8 Kgs for the role in his upcoming film ‘Pushpa’. It is said that the star is eagerly waiting for the crisis to end soon and thus he can be back on sets! ‘Pushpa’ is directed by Sukumar and is produced by Mythri Movie Makers. It remains to be seen how this year ends for the star who wanted to be productive but couldn’t. It’s all about time isn’t it?