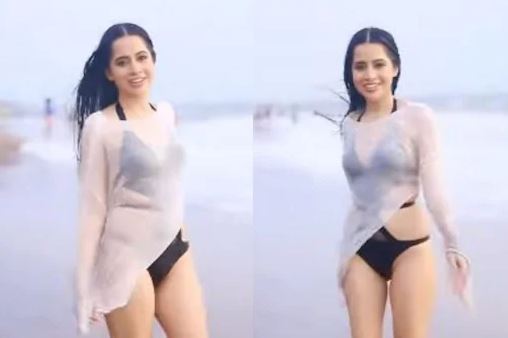 Urfi Javed’s love for bold outfits is known to all. Each time the Bigg Boss OTT fame drops a picture or a video on social media, she leaves her fans stunned. Once again, Urfi Javed is raising the hotness quotient with her too-hot-to-handle beach look.

On Sunday, Urfi dropped a video on her Instagram handle in which she can be seen enjoying herself on a beach. She wore a black bikini with a sheer white cover-up. She can be seen grooving to the song Sway by Michael Bay. With wet hair and a smile on her face, Urfi looks breathtakingly gorgeous. “Happiest at the beach!!” the caption of Urfi’s post read.

The video is now winning fans’ hearts. The comment section of Urfi Javed’s post is flooded with fire emojis. “Uff Ufff,” one of the fans wrote. Another social media user commented, “Black swimsuit further amplifies your beauty…” Hot, gorgeous, and sexy are some of the adjectives that netizens are using for Urfi Javed.

Meanwhile, in a recent interview with News18.com, Urfi Javed also opened up about her mantra to deal with social media trolling. “That’s the thing, I do not have to handle it. Why should I handle it? It’s not for me to reply to anyone who doesn’t like me. If you don’t like me, good for you. People don’t even like their own kids, how they are supposed to like me? I cannot expect everyone to like me. I don’t care much about people liking me or not,” she said.

On the work front, Urfi Javed was last seen in a music video along with singer Kunwarr. She has also worked in several television shows including Bade Bhaiyya Ki Dulhania, Meri Durga, Bepannaah and Puncch Beat Season 2. She also starred in Yeh Rishta Kya Kehlata Hai for some time and later played Tanisha Chakraborty in Kasautii Zindagii Kay 2.