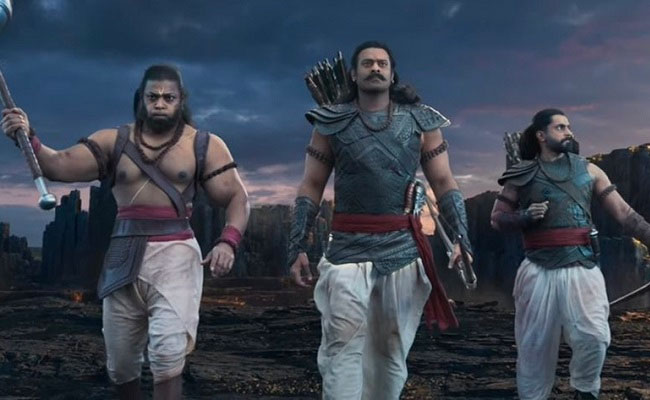 The much-awaited teaser of Prabhas’ mythological drama ‘Adipurush’ has been released on Sunday night amidst a huge crowd gathering in Ayodhya. Fans were eager to see their matinee idol in the Ram avatar and prepared themselves for a visual extravaganza. But they were shell-shocked after watching the teaser as it looked like a 3D animation film with Prabhas, Saif Ali Khan and Kriti Sanon’s faces attached to the computer-generated motion figures.

Not just the fans but even the regular movie lovers too were severly disappointed with the visuals as they vented their anger on social media. Here are a few opinions from the thousands of comments made on social media platforms:

“I expected something out of the box from Om Raut but didnt expect that he comes out aping some Hollywood fantasies. This is a disgrace to Ramayana”.

“Hanuman’s look is a big let down. VGX and CGI elements look cheap”

“We should welcome something new. Om Raut tried a new style of narrating Ramayana. My children liked the teaser. We all will be watching it for sure”.

“This is made on the lines of animation films. I hardly remember Prabhas’ face. Attempts are being made to make the world understand that Ramayana was real and history. But this film makes the epic fictitious giving no value of history to it”.

“Adipurush is for kids. Its made like a circus. I cannot wait this film for sure but I wish at least my kids patronize this film”.

“Why Lord Rama appears in clean shave during Vanavasam? He should have beard as the self shaving was prohibited in those days. Though this may sound trivial, this part caught my attention as I kept on observing the same mistake in almost all of our movies”.

“This is like a paper flower. Colorful but no fragrance. I didnt feel even an iota of divine feel”.

“Adipurush will be a bigger hit than Brahmastra. Initially the netizens cried that the graphics of Brahmastra were cheap. But the young audience made it a huge hit. Save my word. Adipurush rocks”.

Directed by Om Raut, Saif Ali Khan portrays the character of Lankesh in this ‘Adipurush’. Gorgeous Bollywood beauty Kriti Sanon will be seen as Sita while T-Series is bankrolling this project.