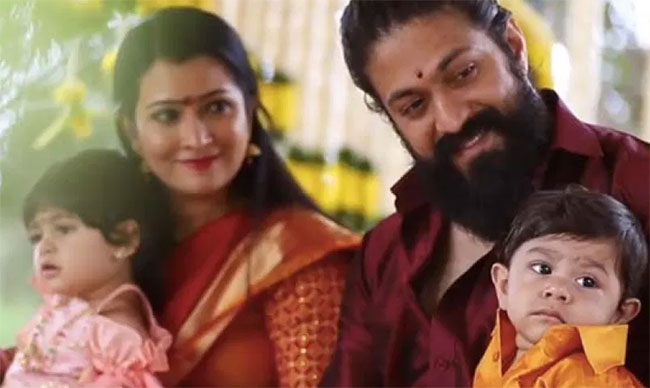 ‘KGF’, the first Kannada film to become a huge hit in all the languages and has grossed a total of 300 Crores which is the first of its huge revenue for a Kannada film! its release has brought its lead actor Yash a Pan India star status. The Director Prashanth Neel who made such a wonderful film with a big canvas is not all shying away to make it bigger this time with the sequel.

Now Yash is enjoying family time with his kids and recently he held a private function for the naming ceremony of his only son in his farm house with very few family members. He has named his son as Yadharv Yash. Fans started calling him as little Rocky Bhai and shared the joy with their favorite star!

Commencing the birthday of Bollywood actor Sanjay Dutt, the ‘KGF 2’ movie team has recently released the first look of his role ‘Adheera’ in the film. The first look is intriguing and has the menacing brutality in it.

It remains to be seen when the movie gets released.