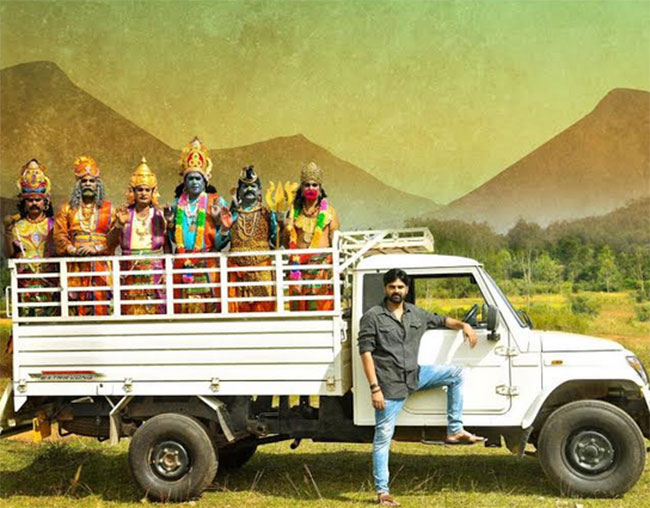 Talented hero Shree Vishnu and seasoned actor Rajendra Prasad have come together for an interesting film titled ‘Gaali Sampath. Directed by Aneesh Krishna of ‘Ala Ela’ fame, this film is being made under ‘Shine Screens’ and ‘Image Spark Entertainments’ banners. Superhit director Anil Ravipudi penned the screenplay for this movie apart from presenting it while his friend S Krishna is the producer. ‘Gaali Sampath’ was launched recently and the shooting is going on at a brisk pace.

The poster where people dressed as various Hindi gods are seen standing at the back of the truck while Sree Vishnu is near the driving seat has been released to announce that the shoot is going.

The makers are picturizing some important scenes in the Araku area and the whole cast is working on this schedule which goes on till December 5th and the next schedule is going to be in Hyderabad. The concept poster which released a few days back created a lot of curiosity over this film. The film focuses on the relationship between father and son in a hilarious yet beautiful manner as per the makers.

Achu Rajamani is composing the music for ‘Gaali Sampath’ while Sai Sriram is the cinematographer. Mirch Kiran wrote the dialogues while S Krishna came up with the story. Lovely Singh is the heroine while the rest of the cast include Tanikella Bharani, Satya, Raghubabu, Srikanth Iyengar, Michi Kiran, Surendra Reddy, Gagan, Memes Madhu, Anish Kuruvilla, Rajitha, Karate Kalyani, Sai Srinivas, Roopa Lakshmi, and others.