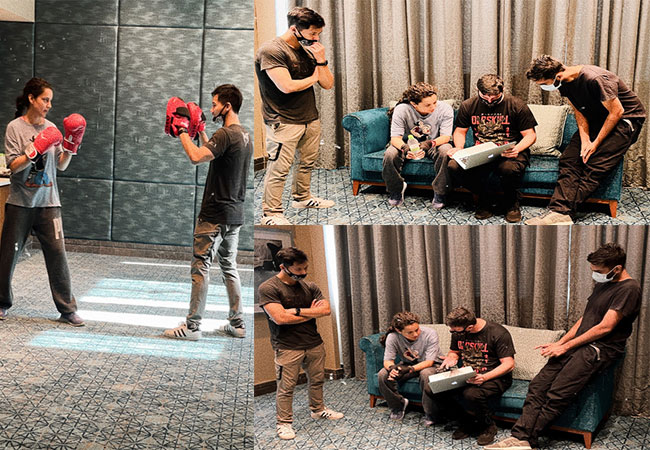 Controversy queen Kangana Ranaut is currently working hard for her upcoming film Dhaakad. The 33-year-old actress has kicked off her training for the action flick. She bid adieu to Manali yesterday and headed to Hyderabad for the shoot. On Friday, the queen actress took to her social media handles to give a sneak-peek into her training session for Dhaakad.

Kangana Ranaut has dropped pictures from her training session in which we can see her dressed in a tee with track pants and sneakers and also wearing boxing gloves.

In one of the photos, she can be seen discussing with the director Razneesh Ghai, and her action trainers.

Sharing the pictures, Kangana wrote, “Don’t like to multitask, but in these times one needs to go back to the beginning in those days I worked like a horse, so along with filming Thalaivi I started action rehearsals with Jason NG/ @brettchanstunts for Dhakaad as well, also lovely to see my charming director @RazyGhai.”

The film is being directed by Razneesh Ghai and produced by Sohel Maklai Productions and Asylum Films and co-produced by Qyuki Digital Media.