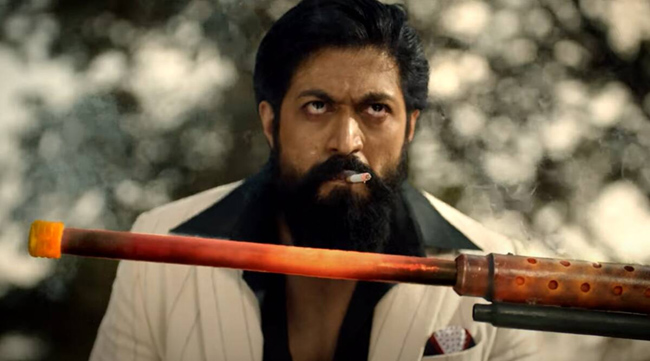 It is known that the makers of the KGF: Chapter 2 had released the teaser on rocking star Yash’s birthday. Ever since the teaser was out, it has been creating a sensation on the youtube with scoring a record number of views and likes. The movie team is basking in the glory for receiving over 147 million views on YouTube within six days.

The highlight scene of the teaser is undoubtedly the smoking scene where the Rocky Bhai light a cigarette with the barrel of the red-hot gun. It was one scene where people applauded and whistled the most.

But looks like the most hooted scene has created a problem for it. The Karnataka health department has issued a show-cause notice to the lead actor for the smoking scene.

According to the notice, as per the statutory requirement, it is mandatory to display a warning on the screen with the caption “Smoking is injurious to health”, but neither the teaser nor the publicity posters display any such message.

The period action film is written and directed by Prashanth Neel and produced by Vijay Kiragandur. Apart from lead actor Yash, the film has Srinidhi Shetty as the female lead. It also stars Sanjay Dutt as the antagonist, Adheera and Raveena Tandon in a pivotal role.