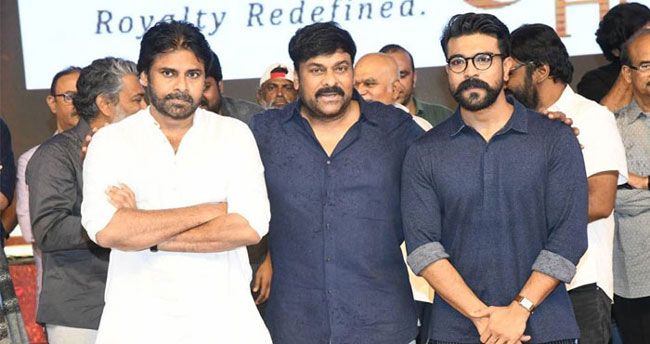 It is evident that Megastar is working in the film ‘Aacharya’ in the direction of Koratala Siva. The star said that he is playing the role of Professor who fights for saving the natural resources in the film who is also a Naxalaite in his past.

On the other side, The Tollywood Megastar is adamant on remaking the Malayalam blockbuster ‘Lucifer’. The movie is also a political thriller.

It is evident that Ram Charan has bagged the remake rights of Malayalam Blockbuster ‘Lucifer’. The role of Mohan Lal would be reprised by Chiranjeevi and the role of Prithviraj would be played by Ram Charan or any other actor.

Not only that Ram Charan has made a good lineup of films for his dad as his return gift when he has foreseen all the films in the beginning for Ram Charan until he attained star status!

Chiranjeevi to the fans surprise has back to back political thrillers to entertain his fans in the coming days. Moreover he has good Directors like Bobby and Vinayak in the immediate projects which proves meticulous planning of Ram Charan for his Dad. Hope he scores a mega hit unlike his real political life!

On the other side we have powerstar Pawan Kalyan lined up with big films from all happening Directors like Krish, Harish Shankar.

Latest reports in TFI say that if at all the commited movies from this big mega heroes release on time all the other heroes films would suffer the shortage of screens during release. In that situation the heroes would look for OTT release which would dent theater business. It is in a way huge support for OTT which the mega heroes should clarify and do their bit to safeguard the theater business if at all situation arises!