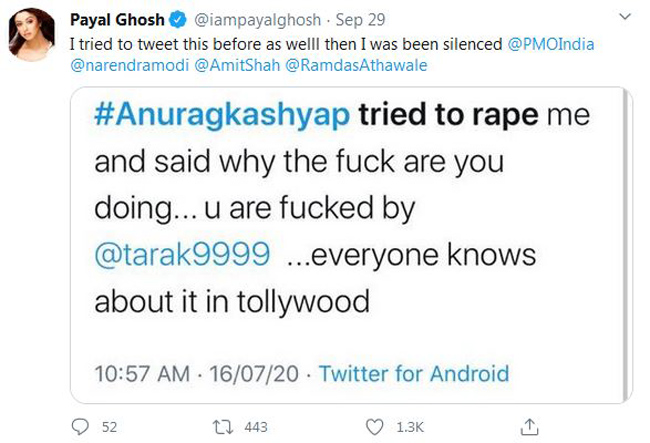 The controversy between actress Payal Ghosh and well-known director Anurag Kashyap is getting big with each passing day. After the accusations made on Anurag by Payal, the ‘Gangs of Wasseypur’ director has been summoned for questioning on 1st October by the Mumbai police.

The ‘Prayanam’ actress accused Anurag of rape and she is taking out all the evidence she can to prove her point. She recently posted a tweet where she claimed that Anurag used NTR’s name while harassing her. It is known that Payal acted as Tamanna’s friend in ‘Ooseravelli’.

Previously, Payal herself tweeted that Jr NTR knows how to respect women. Now, she took NTR’s name and dragged him in the middle of her fight with Anurag Kashyap which is making Tarak’s fans unhappy. They are criticizing her on social media. Payal said that she tried to tweet this before as well but she was silenced. Let us wait and see how far this issue goes.