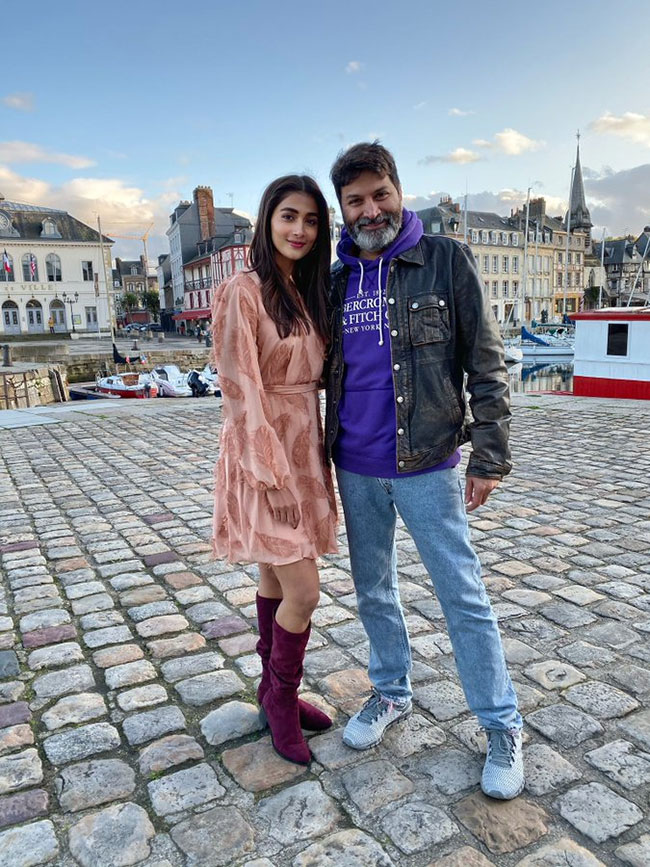 Star heroine Pooja Hegde is currently busy working on the high-budget romantic drama ‘Radhe Shyam’. Parallelly, she is also shooting for Akhil’s romantic comedy ‘Most Eligible Bachelor’. Despite her hectic schedule, Pooja didn’t forget the birthday of her favorite director.

Star writer-director Trivikram Srinivas is celebrating his 49th birthday and Pooja posted a picture of both of them on Instagram. It was taken during one of the song shootings of ‘Ala Vaikunthapuramlo’. She wished him and wrote, Happy Birthday to the coolest, calmest and most charming Trivikram sir. So grateful to have been your Aravind and Amulya. Sill remember when you narrated AVPL, couldn’t stop laughing. Wishing you the best year ahead. All it can say is ‘Guruji sir, Guruji Anthe’ #directorgaru.

Pooja acted as the heroine in Trivikram’s last two films namely ‘Aravinda Sametha’ and ‘Ala Vaikunthapuramlo’. Pooja praised Trivikram on many occasions and this time she used Trivikram’s own ‘Madam Sir, Madam Anthe’ dialogue for praising the top director. Trivikram is currently working on NTR’s film which is yet to begin. The heroine for this movie is yet to be finalized.