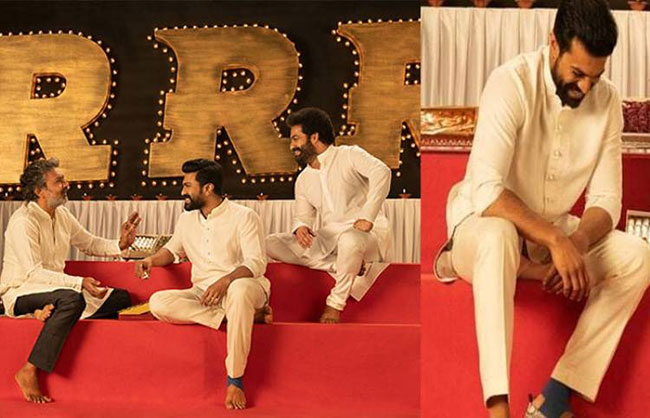 The team of Rajamouli’s magnum opus released some special stills featuring the ace director and the lead actors Ram Charan and NTR. All three of them were seen wearing white kurta and pajamas. They looked wonderful in the ethnic wear and fans are happy to see their stars laughing happily.

But they found something concerning in these clicks. Ram Charan is seen with a bandage on his legs which made the fans worrisome. As we know, NTR and Ram Charan injured themselves during the initial stages of shoot which forced the makers to delay the shooting.

While Tarak recovered from the injury, Charan is still wearing a band on his leg. We are still unaware of how it happened. It might be a new injury or a precaution for the old one. We need to see if the team ‘RRR’ gives any clarity regarding this news.

Charan will be seen as Alluri Seetharamaraju while NTR plays the role of Komaram Bheem in this fictional film based on true characters. Rajamouli introduced the two characters in a stunning manner and raised the expectations to the level of the sky.