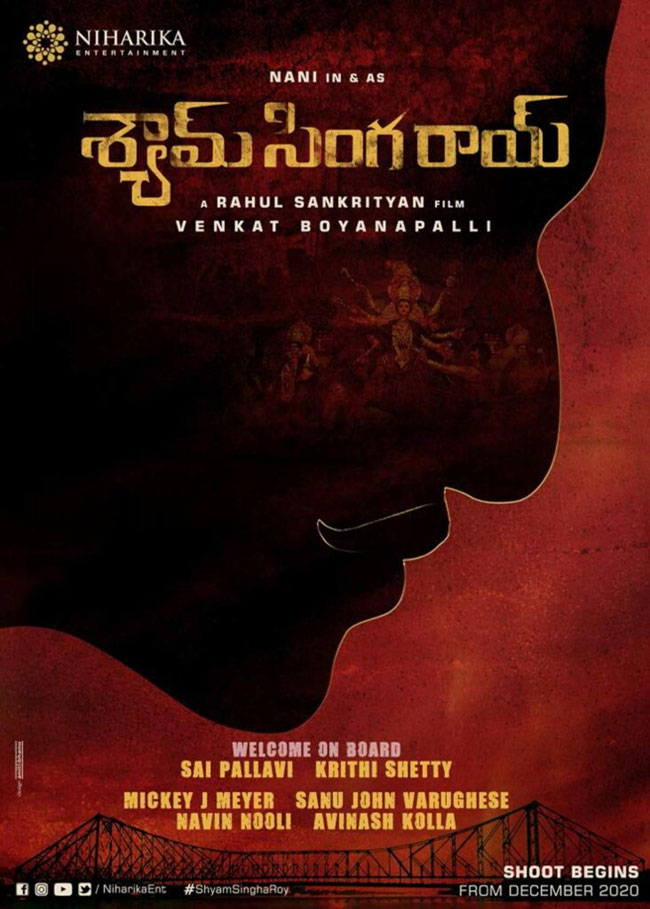 Natural Star Nani’ 27th film Shyam Singha Roy, directed by Rahul Sankrityan, is all set to go on floors from December 2020. Touted to be the costliest film in Nani’s career, the film is reportedly set against the backdrop of Kolkata.

On the auspicious occasion of Dussehra, the makers of the film released spellbinding concept poster which looks very innovative and eye-catchy. The poster features a face of Nani with a moustache and it also highlights the idol of Goddess Kali. Since the film is set on the Kolkata backdrop, the poster showed the Howrah Bridge.

This is indeed a perfect poster to be released on the occasion of Dussehra. This is great news for Nani’s fans as he would reportedly be seen in a new avatar.

The makers have also revealed the names of the leading ladies. Sai Pallavi and Krithi Shetty are on board to play the female leads.

Shyam Singha Roy will be bankrolled by Venkat Boyanapalli under the banner of Niharika Entertainment. The production house has been working with a positive spirit right from the beginning to make the film a blockbuster one. The Natural star has also taken this as a challenge to impress the audience yet again with his strong acting skills and huge makeover.