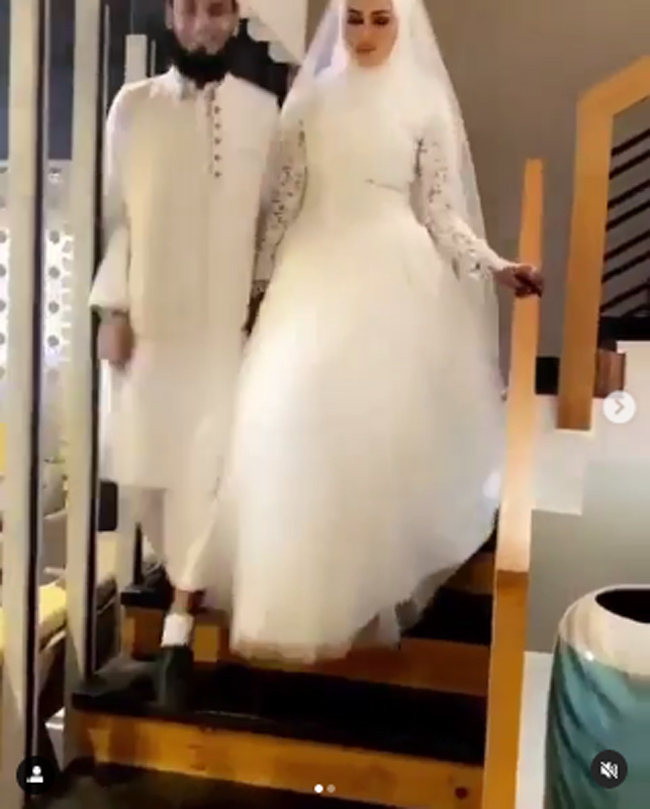 Bollywood actress Sana Khan, who has featured in many Bollywood films and popular television shows, has tied the knot with Gujarat-based Mufti Anaas. The Bigg Boss 6 fame Sana Khan announced her decision to quit showbiz last month to spend her life in the service of humanity and following the orders of her ‘creator’.

The couple had a low profile wedding but videos and pictures from their wedding have gone viral on the internet.

Several videos of the 33-year-old actress have surfaced on internet wherein the couple can be seen walking down the staircase hand in hand. Sana is seen wearing a white wedding gown while her husband sported white traditional attire. They seated along with other family members and cut a chocolate cake with ‘Nikaah Mubarak’ written on it.

Sana Khan made her debut in Bollywood with Yehi Hai High Society in 2005. She featured in many Hindi and Telugu films. She starred in movies like Halla Bol, Jai Ho, Wajah Tum Ho and Toilet: Ek Prem Katha. She was seen in Telugu films like Mr Nookayya, Kathi, Gaganam.