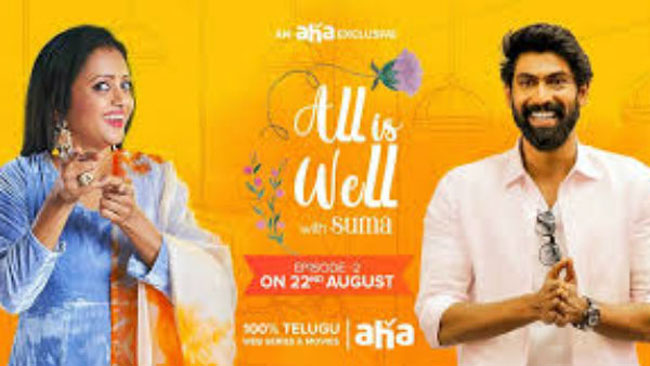 Telugu Anchor Suma is famous for her talk shows and traditional dressing style and Telugu speaking skills on Television Comedy shows and has quite made her name on the small screen. The Kerala origin anchor has made a good name in Telugu TV scenario even in tough competition from the likes of Jhansi and others.

Suma even had a brief stint in Telugu Cinema as a lead heroine but couldn’t sustain her career as the movies acted have bombed at the Box Office then. Nonetheless, she is doing great on TV and fans are still enjoying her presence in the shows.

Recently she has entered the OTT platform with her show All Is Well and this released the promo in which she was seen interviewing Telangana MLA Seethakka and Rana. She joked with Rana saying I have been back of you get married and now I will be back of about becoming dad. To this rant, Rana countered saying that it has been only 4 days of marriage and let us have some enjoyable time in togetherness! Smiles followed then. The show is exclusively available on Aha app.