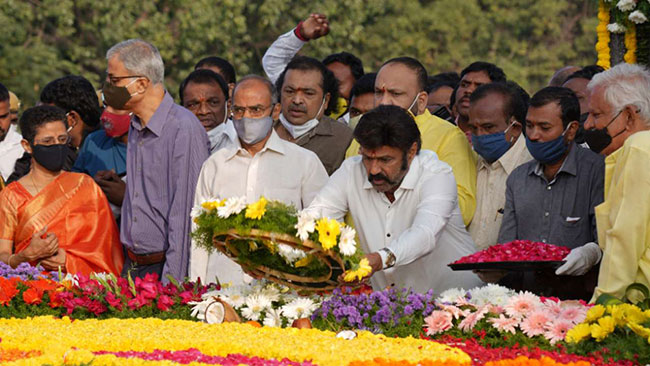 Family members and leaders of TDP remembered legendary NT Rama Rao on his 25th death anniversary on Monday. Popularly called NTR, the actor-turned-politician was one of the most famous leaders in the history of united Andhra Pradesh.

NTR’s son and veteran actor N. Balakrishna paid rich tributes to his father at NTR Ghat on the banks of the Hussain Sagar lake on Monday. Accompanied by some party leaders and dear one’s, the popular actor spoke to the media after paying tribute to his father. He remembered the greatness of NTR and said that the latter made Telugu people proud of his leadership and acting skills.

NTR, who died of cardiac arrest in 1996, had launched the TDP in 1982 and created a record by clinching the power within nine months, ending the Congress rule in the state.