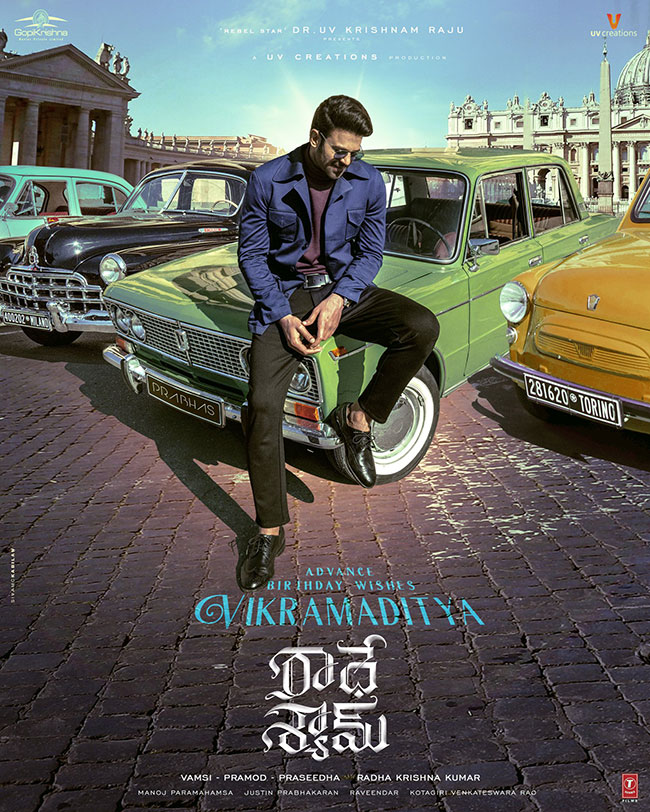 The team of ‘Radhe Shyam’ is making sure that there is a lot of positivity around the film. After releasing the first look of Pooja Hegde a few days back, they surprised us by revealing the character of Prabhas in this film.

The motion poster will be releasing on 23rd October as a gift to Prabhas and his fans but the advance birthday gift came out today. Prabhas has been introduced as ‘Vikramaditya’ in this cool poster. The ‘Baahubali’ star is looking absolutely stylish and handsome in this pose. With a blue coat and goggles on, Prabhas once again proves that he is a step ahead of others when it comes to looks and appearance.

The vintage cars and the European backdrop gives a new vibe to this periodic romantic drama. The car on which Prabhas is sitting has ‘Prabhas’ written on the number plate which is quite interesting. On the whole, the poster looks fantastic and Prabhas is uber cool which is making the fans go crazy.

‘Radhe Shyam’ is directed by Radha Krishna Kumar while Vamsi, Pramod and Praseedha are bankrolling it. Manoj Paramahamsa is the cinematographer while Justin Prabhakaran is composing the music for this big-budget flick.