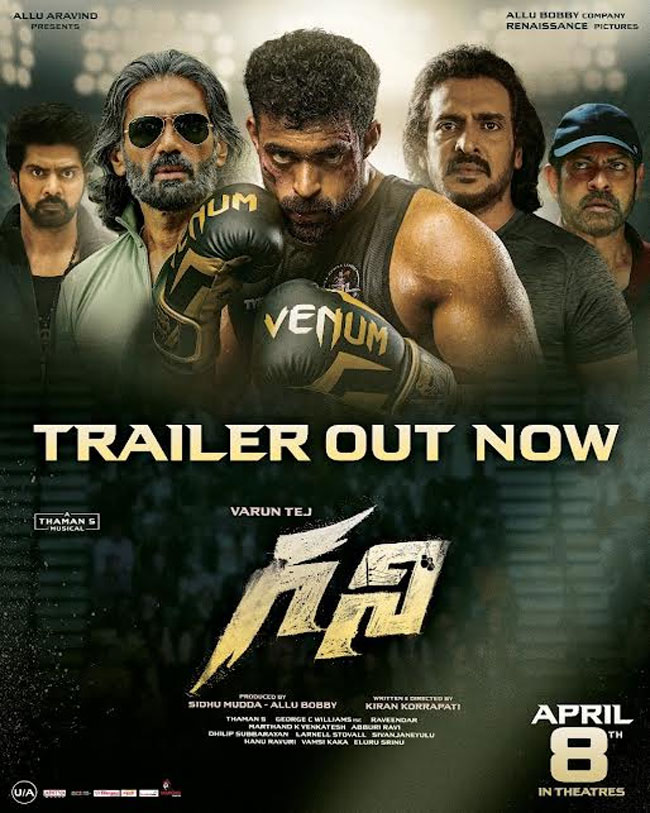 Varun Tej’s 10th film ‘Ghani’ is all set to deliver the knockout punch on 8th April 2022. This sports drama has a lot of buzz around it and film lovers are eagerly waiting for it. Varun will be seen as a boxer in this film who wants to win and make it big.

The film presents his story and the trailer showcased us what to expect from this movie. It is filled with a lot of boxing scenes, montages of the hero practicing and developing his strength, the love track with heroine, mother sentiment and politics in sports. It is a well-packaged trailer and the visuals look perfect.

Naveen Chandra will be seen as the villain who challenges Varun Tej in this movie while Jagapathi Babu, Upendra and Sunil Shetty play important roles. Saiee Manjrekar looks cute and makes her presence felt. Varun Tej definitely steals the show with his different looks and muscular body. He is going to play a role that requires his best and he seems to have given his everything for ‘Ghani’.

Happening music composer Thaman is given the music for ‘Ghani’ while George C Williams is the director of photography. Marthand K Venkatesh is the editor for this sports drama while Nadiya will be seen as the hero’s mother. Tamanna will be seen doing a special song in this movie. Kiran Korrapati is making his directorial debut with this crazy project. Sidhu Mudda and Allu Bobby have bankrolled this project under Renaissance Pictures and Allu Bobby Company banners.