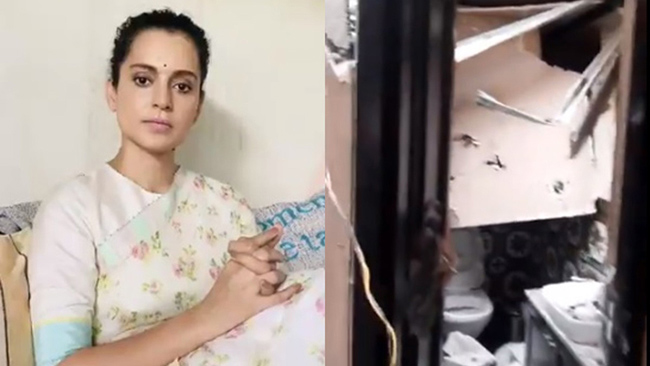 Bollywood actress Kangana Ranaut arrived Mumbai on Wednesday, hours after the Brihanmumbai Municipal Corporation carried out the demolition of her office. On Thursday, the 33-year-old actress paid a visit to the property and surveyed the damage.

Kangana said in a tweet that she will not renovate her demolished office as she doesn’t have money to renovate it. She had opened the office in January, shortly after pandemic hit us, like most of us she hasn’t worked ever since. She also said that she will work from those ruins as a symbol of a woman’s will that dared to rise in this world.

“I had my office opening on 15th Jan, shortly after corona hit us, like most of us I haven’t worked ever since, don’t have money to renovate it, I will work from those ruins keep that office ravaged as a symbol of a woman’s will that dared to rise in this world #KanganaVsUddhav,” Kangana tweeted.

The controversy started after Kangana compared Mumbai to Pakistan-occupied Kashmir. Shiv Sena leader Sanjay Raut condemned her comments and advised her not to set foot in Maharashtra.