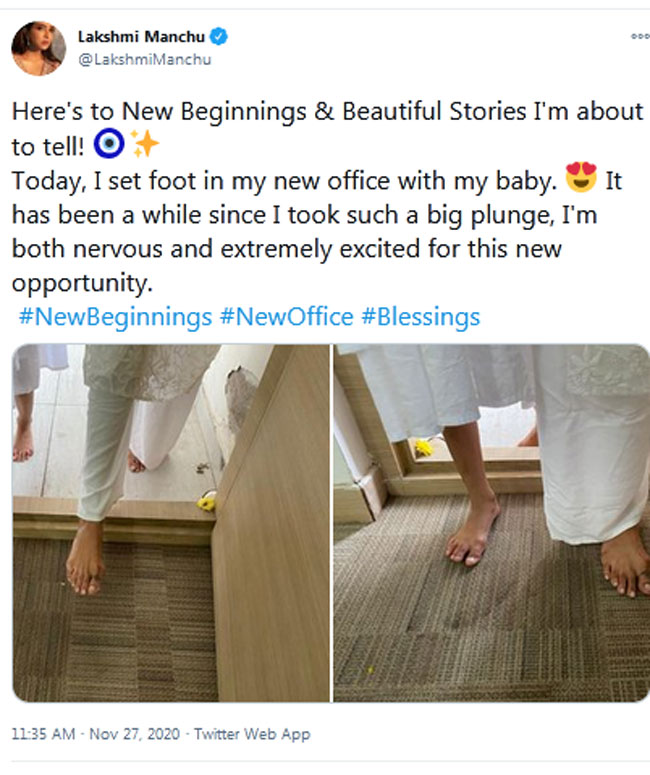 Manchu Lakshmi has impressed the Telugu audience with her strong acting skills and hosted a variety of shows on Television. She also made some events useful to the community and involved several celebrities in it. She attracted more people with his lifestyle than with films. The way she speaks in English goes viral on social media which made her more popular.

Manchu Lakshmi invented some new words while talking to the media like Niladisfai. The word went viral on social media.

Recently Manchu Lakshmi opened her new office. She kept her right foot along with her daughter and entered the office. Sharing these photos on social media she became emotional.

Along with the pictures, she wrote, “Here’s to New Beginnings & Beautiful Stories I’m about to tell! Today, I set foot in my new office with my baby. It has been a while since I took such a big plunge, I’m both nervous and extremely excited for this new opportunity. #NewBeginnings #NewOffice #Blessings.”

Looks like Lakshmi is quite excited to start a new beginning. It seems that she is going to do a new web series and talk shows in the coming days.