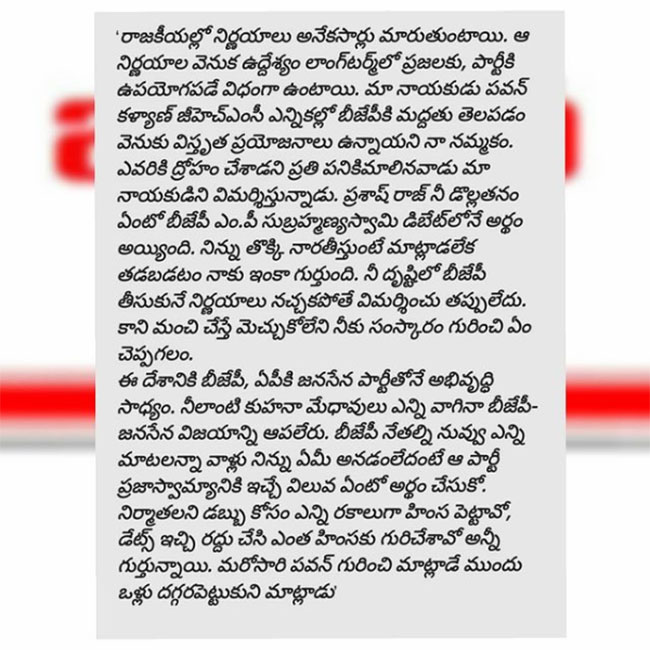 The GHMC elections are becoming a big discussion point in the two Telugu states. There is a lot of debates and criticism over Pawan Kalyan staying away from these elections. Veteran actor Prakash Raj slammed Jana Sena chairperson Pawan for his chameleon-like behaviour and Nagababu’s response over this has become viral on the internet.

Nagababu fired on Prakash Raj claiming that every decision has a long-term purpose and Pawan’s support to BJP has its own reason whereas it became a fashion for every ‘useless’ guy to comment on Pawan Kalyan. He stated that it is not wrong to criticise BJP as it is a person’s own opinion but the development is only possible with BJP and Janasena parties and pseudo seculars like him cannot stop the victory. He reminded the days when Prakash Raj tortured producers with his behaviour. He demanded Prakash Raj to become a better person before criticizing Pawan Kalyan.

Nagababu stated that BJP never said a single word about Prakash Raj which explains the party’s tolerance and respect towards others. These comments have become a sensation and Pawan supporters are in all praise for Mega brother. Let us wait and see how this scenario shapes up in the coming few days.