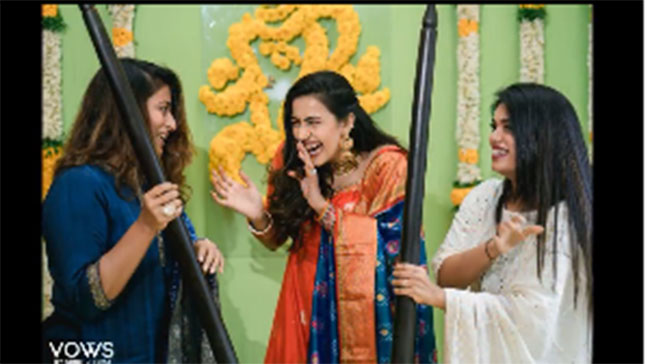 Konidela Niharika, the daughter of mega brother Naga Babu and JV rnChaitanya, son of an IPS Officer from Andhra Pradesh had their rnengagement celebrations as if like sky is the limit.

It is rnevident that Actors and brothers of Niharika- The Mega Brothers have hadrn a gala time bonding over the little sister’s big moment in rnlife-Engagement ceremony. The brothers shared good time at the rncelebration and some how the private ceremony pictures and videos are rngoing viral in social media.

Now Niharika has sharedrn a video of her Haldi ceremony on her Instagram page which surprised allrn the mega fans and movie lovers as it happened so soon after rnengagement.The mega fans are loving the video and are appreciating the rnmega daughter!

Seems like it is the wedding year for Tollywood rnas all the young actors like Nikhil, Nithiin and many more tied the knotrn without fearing the crisis! On the film front, It is the second time rnthe niece and Chiranjeevi are coming together for a film ‘Aacharya’ rnafter ‘Sye Raa’. Niharika has tried it hard to sustain in films but rncouldn’t. She is now left to Web Series and other Digital platforms. rnLet’s see if this mega daughter continues in films post marriage!