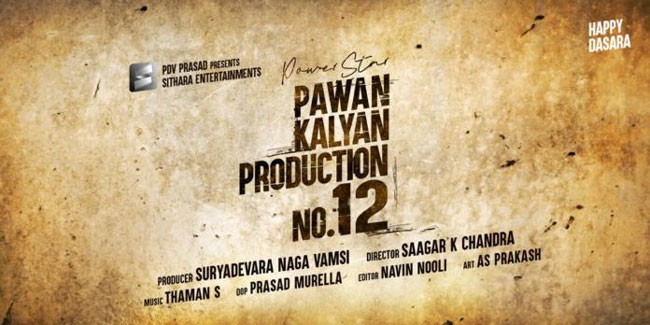 What could be more happy news to Pawan Kalyan fans on Dussehra festival than getting an update from his next project? Yes, producer Suryadevara Naga Vamsi of Sithara Entertainments banner has announced a film new with Powerstar Pawan Kalyan.

Sithara Entertainment’s untitled production no 12 starring Pawan Kalyan, is being directed by Saagar K Chandra. PDV Prasad will be presenting while Suryadevara Naga Vamshi will be producing the project. Music is by SS Thaman.

SS Thaman’s background music is impressive in the teaser. Symbolic music has raised interest in choosing a concept that looks like something new and thrilling. In the short high voltage video, we can see a Power star in a shadowy backdrop. Seems like the Gabbar Singh actor will be playing a Cop role in the films as the video has the words, “Favourite cop of Telugu cinema is back in a high voltage role.”

The untitled film is likely to go on floors sometime in 2021 and the makers will finalise the cast and crew later.