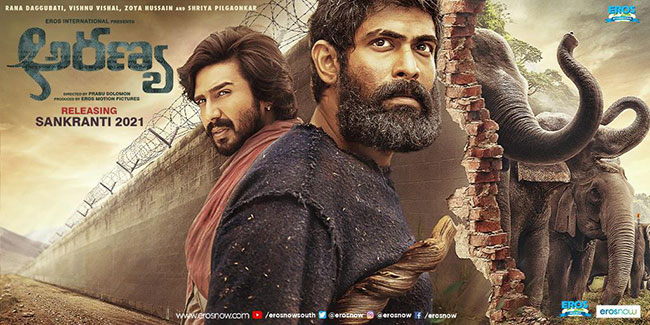 Handsome hunk Rana Daggubati’s much-awaited project ‘Aranya’ which was supposed to hit the screens long back is finally arriving on the 2021 Sankranti season. This film is about a fight to save forests from deforestation and industrialization.

‘Aranya’ is a multi-lingual film that is made in Hindi as ‘Haathi Mere Saathi’.The film’s unit released a brand new poster and a motion video to announce the film’s release date i.e Sankranti 2021. We can see Rana and Vishnu Vishal in the poster. They are standing on one side of the broken wall while the elephants are seen on the other side.

Rana’s will be seen as a jungle man with a thick beard who lived in the jungle for the past 25 years. ‘Aranya’ focuses on how to deal with ecological issues. Zoya Hussain and Shriya Pilgaonkar are also acting in this movie which was made on a grand scale by Eros International company.

The teaser which was released prior to the lockdown got tremendous response and ‘Aranya’ looks like technically sound film which deals with a pressing social issue. With the film hitting the big screens during the Sankranti season, we need to see how the audience respond to this message-oriented multi-lingual flick.