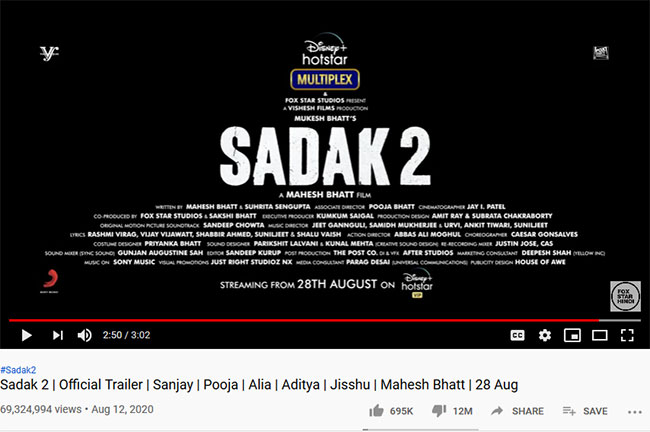 The Bhatt family is getting a solid taste of anti-nepotism gang right now. Mahesh Bhatt’s name linked with Sushant’s case and Alia Bhatt being a nepotism product has proved to be very costly for their upcoming film ‘Sadak 2’. The trailer of this film which was released a few weeks back is getting a lot of negativity.

People started to dislike it from the moment go and more than 12.5 million people disliked the video. It is the most disliked movie trailer in the world and 2nd most disliked video in the world and just stands behind ‘Youtube Rewind’. The film is releasing on Disney Hotstar on 28th September and the makers are worried about the film’s reception.

On the other hand, Disney Hotstar owners who are releasing this film on their OTT platform are tensed as they may also get the negativity. There is a huge chance that they might lose some of their subscriptions as per the experts which is why they are reportedly having second thoughts over this flick.