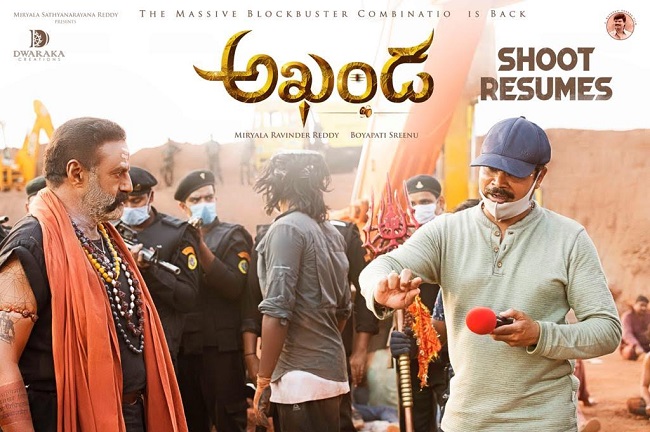 The combination of Nandamuri Balakrishna and Boyapati Sreenu has given super hits like ‘Simha’ and ‘Legend’ in the past. They came together for the third time and right from the word go, this film is carrying a lot of expectations. The title ‘Akhanda’ got a huge response from the fans and what pleased them more are the two teasers which came out till date. They had everything that fans expected and Balayya’s powerful dialogues made the fans go crazy.

Balakrishna will be seen as an Aghora for a brief period in this film and teaser which revealed his getup for a thumping 50 million views which is the highest for any senior hero in South India. The mass masala entertainer was supposed to hit the screens on 28th May but the shooting came to a halt due to the second lockdown. After a gap of 2-3 months, the film’s team is back on the sets.

The makers of ‘Akhanda’ have officially announced that the final schedule of shooting has begun in Hyderabad today. It will be a wrap for ‘Akhanda’ after this schedule and the team released a special behind-the-scenes picture where Boyapati is seen explaining the scene to Balayya who is donning the Aghora avatar. The poster looks powerful and the fans can’t wait to see the film on the big screens. The makers said that the film will be ‘ROARING’ soon in theatres.

This action entertainer will have a lot of fight sequences that please the fans of Balakrishna along with some trademark dialogues that will bring the whistles in theatres. There are a lot of attractions and assets in this film as per the sources close to the team. While the teaser definitely satisfied the fans, it is to be seen if ‘Akhanda’ ends up as a hattrick in Balayya-Boyapati or not.

Miryala Ravinder Reddy is producing ‘Akhanda’ on his ‘Dwaraka Creations’ banner while young and glamorous beauty Pragya Jaiswal will be seen as the heroine. Hero Srikanth will be playing a crucial role while star composer Thaman is taking care of the music. C Ram Prasad is the cinematographer while ‘Akhanda’ will be edited by Kotagiri Venkateshwara Rao.