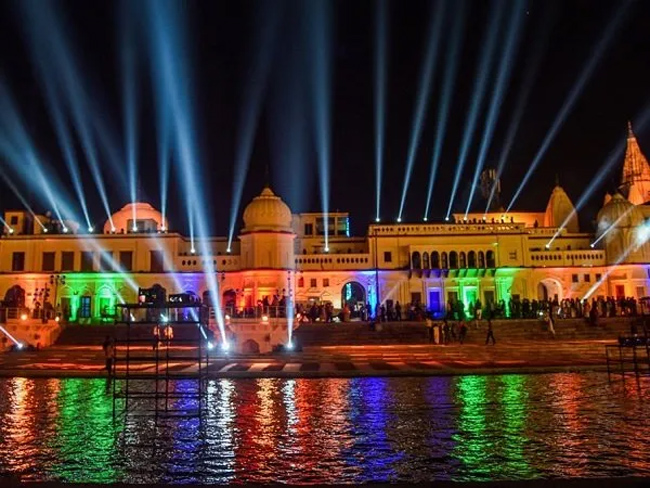 On the occasion of the Diwali Festival, the celebrations have started in the holy city of Ayodhya. Lakhs of earthen lamps have lightened up on the banks of the holy Sarayu river. As part of the ‘Deepotsav’ celebrations, more than 5.84 lakh earthen lamps were lightened. The Deepotsav marks the first-ever Deepotsav after the Bhoomipoojan and made it to the Guinness book of world records.

The aerial video of the Temple site with lakhs of earthen lamps has turned the temple-town into a lamp town. The 11 tableaux which depicts various chapters of Ramcharitmanas added a grandeur look to the celebrations.

The Video of Deepotsav was shared on the official Twitter handle of Uttar Pradesh Tourism. ‘Glittering Ayodhya city spreads magic in the sky,’ the caption for the post read.

A grand Bhoomi Pujan was held on August 5 this year to lay the foundation stone for the construction of the holy Ram Mandir shrine.

Earlier on August 5, 2020, Prime Minister Narendra Modi performed Bhomipjan at the temple site and laid the foundation stone for the Ram Mandir on Ayodhya after the Supreme Court ruled that the disputed 2.77 acre land in Ayodhya will go to Hindus while Muslims will be given a five-acre plot at an alternate location in the city for construction of the mosque

Diwali is a popular Hindu festival which is celebrated to mark the return of Lord Shri Rama to Ayodhya after completing vanvas for 14 years with his wife Sita and younger brother, Lakshmana.