Trending Now >>
Swathi Weekly | వేడి వేడి వంటలు
You are at:Home»HEADLINES»Missing Nepal Plane with 22 Onboard Crashes in Mustang, Rescue Ops Halted Due to Bad Weather
By TeluguNow . on May 29, 2022 HEADLINES 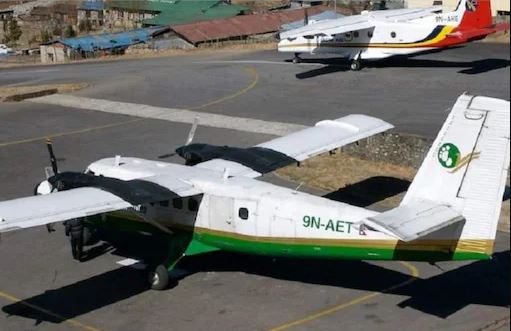 A Nepalese aircraft carrying 19 passengers, including four Indians, that had lost contact with the ground support on Sunday morning, has been found at Kowang in Mustang district. The status of the aircraft is, however, yet to be ascertained, ANI reported quoting Tribhuvan International Airport chief.

The plane crashed at the mouth of the Lamche river in Mustang. According to Rathi Narayan Silwal, assistant spokesperson of the Nepal Army, local residents reported that the aircraft crashed under the landslide site at the foot of the mountain. The Nepalese Army is moving towards the site from the ground and air route.

Rescue or search ops have halted for today due to bad weather. Choppers have returned to Pokhra and Jomsom. The Nepal police and army have also stopped their movement because of the inclement weather. Search ops to resume tomorrow morning.

A Nepal Army helicopter carrying 10 soldiers and two employees of the civil aviation authority landed on the bank of the river near the Narshang Monastery, the possible site of the crash, according to My Republica newspaper. A Nepal Army helicopter has landed on the riverbank near Narshang Gumba,” Prem Nath Thakur, general manager of the Tribhuvan International Airport was quoted as saying by the newspaper.

Villagers had seen an aircraft on fire

State-owned Nepal Television said villagers had seen an aircraft on fire at the source of the Lyanku Khola River at the foot of the Himalayan mountain Manapathi, in a district bordering Tibet. “Ground search teams are proceeding toward that direction,” Tara Air spokesperson Sudarshan Gartaula told Reuters, referring to the fire site. “It could be a fire by villagers or by cowherds. It could be anything.”

The Civil Aviation Authority of Nepal (CAAN) also said a team was headed to that area.

The twin-engine aircraft- Tara Air’s 9 NAET- flew from Pokhara to Jomsom at 9:55 am on Sunday morning and lost contact five minutes before it was due to land at Jomsom, a popular tourist and pilgrimage site.

The aircraft was carrying 4 Indian and 4 German nationals. The remaining passengers were Nepali citizens and there were 3 crew members on the plane, a report in ANI said.

“The aircraft was seen over the sky of Jomsom in Mustang district and then had diverted to Mt. Dhaulagiri after which it hadn’t come into contact,” Chief District Officer reportedly said.

Captain Prabhakar Prasad Ghimire led the three-member crew of the aircraft. Utsav Pokhrel is the co-pilot while Kismi Thapa is the air hostess, My Republica newspaper reported, quoting Pokhara Airport Information Officer Dev Raj Adhikari. The airline has issued the list of passengers which identified four Indians as Ashok Kumar Tripathi, Dhanush Tripathi, Ritika Tripathi, and Vaibhawi Tripathi. The aircraft was scheduled to land at Jomsom Airport in the Western mountainous region at 10:15 am.

Aviation sources said that the aircraft lost contact with the tower from the sky above Ghorepani on the Pokhara-Jomsom air route. According to an air traffic controller at Jomsom Airport, they have an unconfirmed report about loud noise in Ghasa of Jomsom.

The Nepal police and the army had swung into action in search of the plane. The mountainous terrain and the weather have been posing a big challenge in the search operation.

Meanwhile, the Nepalese Home Ministry has deployed two private helicopters from Mustang and Pokhara for the search for missing aircraft. “Nepal Army chopper is also being prepared to be deployed for the search,” Phadindra Mani Pokharel, spokesperson at Home Ministry said.

“Tara Air flight 9NAET that took off from Pokhara at 9.55 AM today with 22 people onboard, including 4 Indians, has gone missing. Search and rescue operation is on. The embassy is in touch with their family. Our emergency hotline number :+977-9851107021,” it said in a tweet.
(With agency inputs)