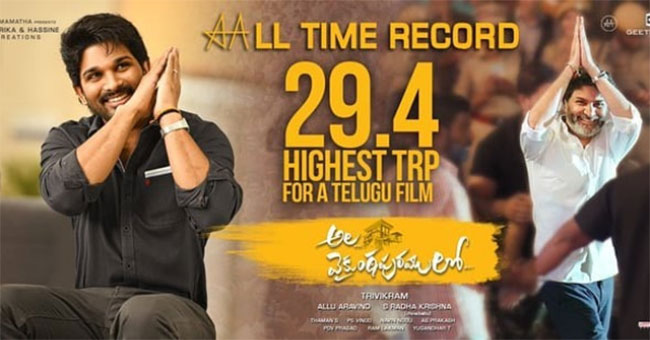 Ala Vaikunthapurramuloo starring Stylish star Allu Arjun and Pooja Hegde in the lead roles was a huge success with both the audience and critics. By surpassing all the non-Baahubali records in the Telugu states, the Trivikram’s directorial has collected a worldwide share of over 150 crores in its full theatrical run.

Not just on big screens, the film has now smashed all previous records on TV as well. The film was aired on the Television on August 16th on Gemini TV and it managed to secure a 30 (TVR) Television Ratings in Urban areas and 29.4 overall, which is the highest for a Telugu film.

“It has been 7 months post Theatrical release and 6 months post OTT release. Still #AVPL managed to set a RECORD BREAKING-HIGHEST TRP – 29.4 for any Telugu Film ever. Thank you for such a phenomenal response & love,” tweeted Geetha Arts.