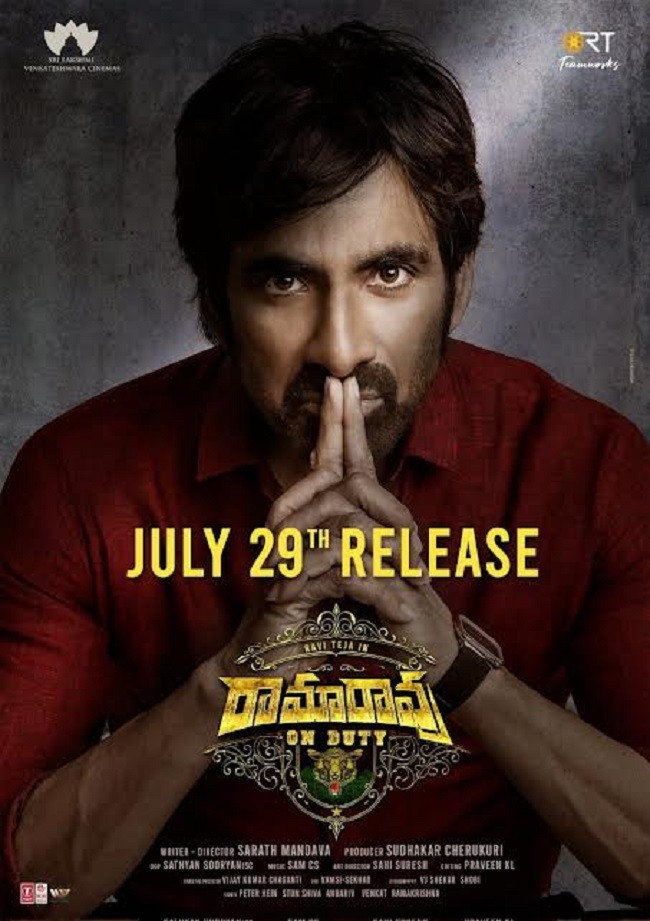 First film is very special to every filmmaker as they have invested a lot of time, effort, hardwork and dreams into it. Debutant Sharath Mandava is entering the industry as a director with ‘Ramaro On Duty’ is experiencing the same feeling at the moment. His action entertainer with Ravi Teja is all set to release on 29th July and everyone is excited about it.

Sharath Mandava is giving interviews to the media and he recently explained the reason behind the film’s postponement. He opened up about how he named the film ‘Ramarao On Duty’. He said, “Earlier, we thought the movie title as ‘Government on duty’ but upon our DOP @sathyaDP suggestion ,we considered #RamaRaoOnDuty as the title and our hero @RaviTeja_offl garu accepted to it right away.”

The latest update says that the picturization of two songs and some talkie part is left for shooting. Rajisha Vijayan and Divyansha Koushil are the female leads in this project while Nasser, Sr Naresh, Pavitra Lokesh, ‘Sarpatta’ John Vijay, Chaitanya Krishna, Tanikella Bharani, Rahul Rama Krishna, Eerojullo Sree, Madhu Sudan Rao, Surekha Vani and others play key roles. Sam CS composed the music for this film while Sathyan Sooryan is the director of photography. Praveen KL is the editor and this story is written from true incidents.

This movie produced under Sudhakar Cherukuri’s SLV Cinemas LLP and RT Teamworks is directed by debutant Sharath Mandava. Venu Thottempudi plays a key role and Ravi Teja will be seen as a Deputy Collector Mandal Revenue Officer in his 68th film. The recently released ‘Naa Peru Seesa’ sung by Shreya Ghoshal is getting a lot of good responses from the audience.