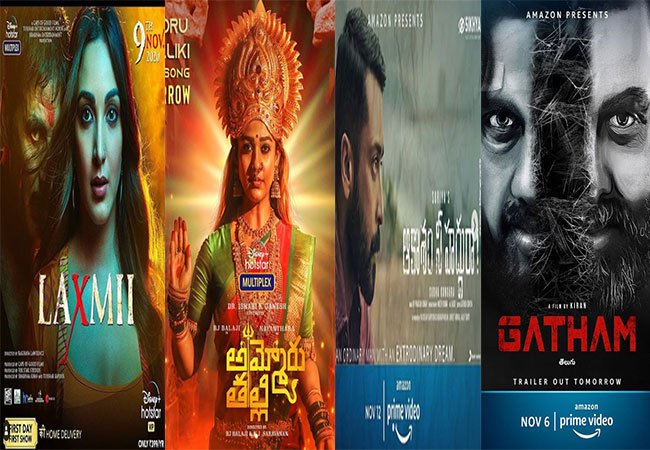 Despite the government giving their green signal to reopen the theatres, the owners and distributors decided to hold on for a few more weeks. Even the filmmakers are not eager to put their movies in risk by releasing it on big screens.

At this time when there is a dilemma over the theatre releases, the OTT platforms are luring the film lovers with crazy films every weekend this November. Amazon Prime will be premiering a thriller film titled ‘Gatam’ on 6th November. Disney Hotstar is releasing Nayanthara’s ‘Ammoru Thalli’ on November 9th. On the same day, superstar Akshay Kumar’s ‘Laxmmi’ will be premiered on Disney Hotstar. As we know, it is the Hindi remake of Tamil horror-comedy ‘Kanchana’.

Star hero Suriya’s ‘Aakasame Nee Haddu Ra’ will be streaming on Amazon Prime Video from 12th November in Tamil, Telugu, Kannada and Malayalam languages. On 20th November, Anand Devarakonda and Varsha Bollamma’s ‘Middle Class Melodies’ will be streamed on Prime Video. This list extends till December as some or the other crazy film is coming on digital platforms. The movie buffs are in for a real treat in the next two months. Brace yourselves!