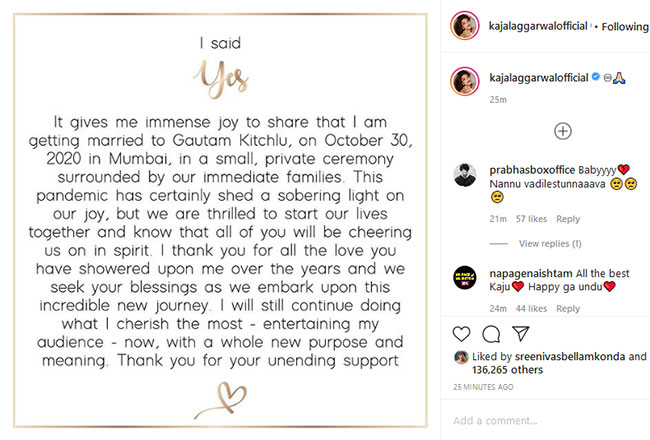 From the past few days, sizzling actress Kajal Agarwal has been giving indications about her engagement as she uploaded her celebration clicks on social media. This has been all over the news and finally, Kajal Agarwal herself made it official today.

Tollywood’s ‘Chandamama’ took to social media and announced, ‘I said Yes.’ She happily stated that she is getting married to Gautam Kitchlu on October 30th. The wedding is going to be a small and private ceremony which will be surrounded by their immediate families. As expected, they will be married in Mumbai and Kajal is pretty thrilled to take this big step in her life.

She made it clear that she will still continue acting in movies and she cherishes entertaining audience the most. She thanked everyone for all the love she received over the years and sought blessings from everyone.

This big announcement has brought immense joy to all of her fans and they started flooding the comments section with congratulatory messages. The 35-year-old star actress is currently working on prestigious projects like ‘Acharya’ and ‘Indian 2’.