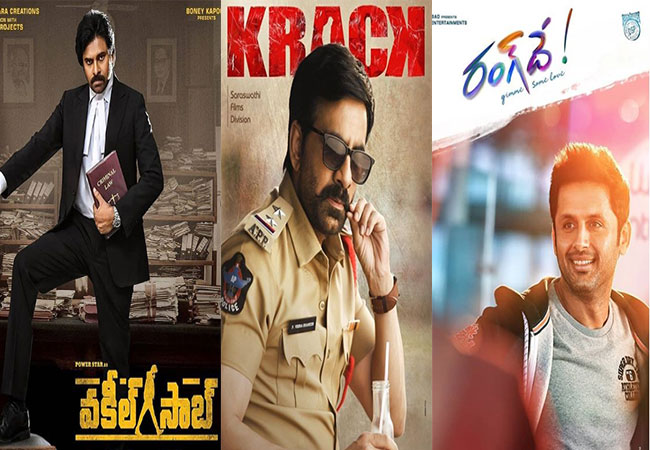 The cameras have started rolling again in Tollywood after a long break. Films that were stopped halfway have begun again. Most of the filmmakers are now trying to lock the Sankranti dates from now itself. No matter when the theatres reopen, producers aiming for the Pongal season.

Nithiin and Keerthy Suresh’s ‘Rang De’ already announced that they will be coming in January. Akhil’s ‘Most Eligible Bachelor’ will also be arriving on the Sankranti season. Ram’s ‘RED’ which is completed a very long time ago is also aiming for the same season. Ravi Teja’s ‘Krack’ waited for a long time to have a theatrical release and the makers reportedly think that Pongal season is the best time.

Pawan Kalyan and Dil Raju’s ‘Vakeel Saab’ is also expected to arrive during Sankranti and the team is trying to finish the shooting as quickly as possible. Sai Tej’s ‘Solo Brathuke So Better’ was supposed to have an OTT release but with theatres reopening in October, the makers are said to be having second thoughts.

Naga Chaitanya and Sekhar Kammula’s ‘Love Story’ is expected to release during the third week of December while the fate of Vaisshnav Tej’s ‘Uppena’ is yet to be decided. But it looks like a lot of films are going to entertain us during the Sankranti festive season.