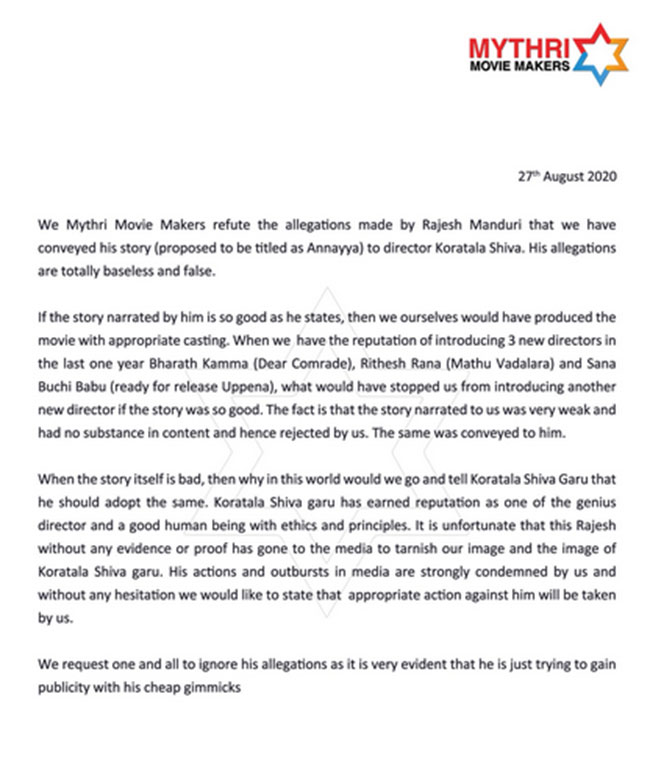 The Megastar of Tollywood is now working in the film ‘Aacharya’ in the direction of Koratala Siva. The film is going through a turbulent days and the makers are greatly worried about the proceedings.

Recently, Manduri Rajesh, a Writer and wannabe Director alleged that Koratala Siva and Mythri Movie Makers have stolen his idea of endowment officer story when he narrated the script in their office few months ago. He said that he has approached many bigwigs in film industry but none helped and even provoked me to go ahead with legal action which I would opt until justice gets delivered, Rajesh ended.

Rajesh who is an assistant Director to B Gopal said that he has worked for 3 years for this subject and has hopes that megastar delivers justice to him Mythri Movie Makers has released a letter to media saying that the story narrated by Rajesh is not the Aacharya. They even said that if he has narrated a great script we would have introduced him as the Director! This shows the way how the production house clearly manipulated and deceived a budding writer. Hope Chiranjeeci delivers justice and gives credit!

‘Aacharya’ stars Ram Charan in a pivotal role and Kajal Aggarwal as the leading lady. The movie is produced by Ram Charan’s Konidela Productions and Matinee Entertainments Pvt. Ltd.