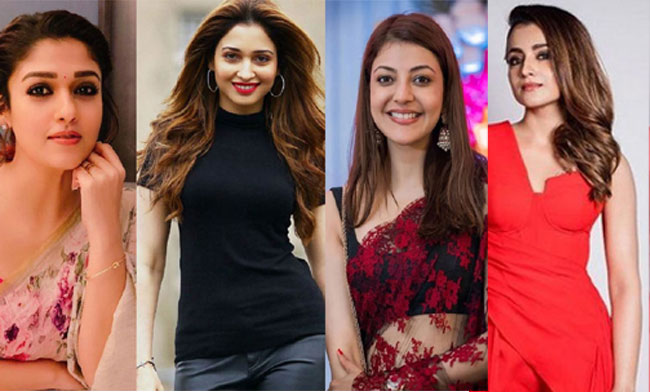 We usually say that heroines have a very short career, unlike others. But there are a few star heroines who are proving this statement wrong. Seniors like Nayanthara and Trisha are in the industry from the past 17-18 years and are still going strong. Even Kajal and Tamanna are staying at the top for nearly 15 years. Despite crossing their thirties are still charging crores of remuneration which explains their craze.

Each of these four heroines have their schedules packed for at least another two years. Nayanthara is considered as a lady superstar in Tamil. She is able to work with young heroes as well as senior star heroes. She is even giving hits with lady-oriented films. Even Kajal is busy working with seniors like Chiru and Kamal Hassan other than doing films with Vishnu and a couple of other Tamil as well as Malayalam films.

Tamanna is not just limiting herself to a heroine but doing special songs as well as villain roles in her upcoming projects which is keeping her busy despite the entry of many heroines. Trisha too became very busy after ’96’ and has half a dozen films in her hand now. While Anushka is releasing one film in 2-3 years, Haniska is no longer part of this list while Charmee became a full-time producer.