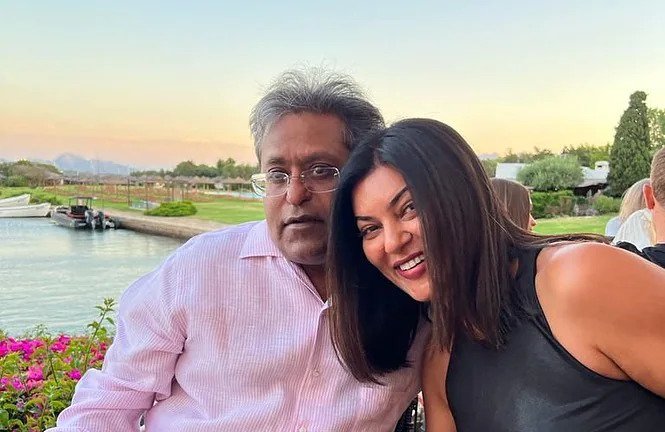 Sushmita Sen wasn’t romancing Lalit Modi until she ended her relationship with her boyfriend and model Rohman Shawl, reported ETimes.

IPL founder Lalit Modi announced that he is dating former Miss Universe and Bollywood actor Sushmita Sen, by sharing a couple of cosy pictures with the actress on social media, on Thursday. Soon after Lalit shared this announcement, some old tweets of him and the actress went viral on the Internet, hinting that they have been seeing each other since 2013. However, as per a report in ETimes, the relationship of Lalit and Sushmita is a recent development, and they started dating each other only after her break-up with ex-BF Rohman Shawl.

Per the report, Lalit Modi’s wife Minal Modi was alive till 2018 and they were in a happy and committed relationship. It may also be recalled that Sushmita had several romances post-2013 with Ritik Bhasin, Bunty Sajdeh, Randeep Hooda and Rohman Shawl.

Hence, the tweets taking over the internet can be seen as fun banter. The entertainment outlet also reported that the duo – Sushmita Sen and Lalit Modi have always found each other charming.

Sushmita Sen’s Brother Rajeev On Her Relationship with Lalit Modi: Wasn’t Aware at All, Pleasantly Surprised

Hence, the tweets taking over the internet can be seen as fun banter. The entertainment outlet also reported that the duo – of Sushmita Sen and Lalit Modi have always found each other charming.

It all started on Thursday evening, when Lalit Modi, the founder of the Indian Premier League (IPL), sparked marriage rumours with Sushmita Sen, after he posted a series of intimate pictures of them on his official social media accounts and referred to her as his “better half”. The Indian businessman and cricket administrator, who is currently a fugitive, took to social media and shared several pictures with Sushmita, some of which featured the two sharing intimate moments.

“Just back in London after a whirling global tour #maldives #sardinia with the families – not to mention my #betterhalf @sushmitasen47 – a new beginning a new life finally. Over the moon,” he captioned the post.

He later took to Twitter to clarify that they aren’t married, but just dating for now. He posted, “Just for clarity. Not married – just dating each other. That too it will happen one day .”

In fact, Lalit’s Instagram bio also mentions this new development in his life. After mentioning details of his work life, he further added, “finally starting a new life with my partner in crime. My love @sushmitasen47.” His current display picture, too, features Sushmita alongside him.

This comes months after Sushmita announced her breakup from Rohman Shawl. The Aarya star confirmed her breakup through social media. The actor’s post spoke about the everlasting love and friendship shared by the two of them.

Sushmita Sen is the mother of two adopted daughters. She made her acting comeback with the web series Aarya. The actress recently revealed that she came close to getting married thrice, and all three times “God saved” her.

Sushmita Sen won the Miss Universe 1994 pageant and went on to make her debut with Mahesh Bhatt’s Dastak in 1996. She has appeared in films like Biwi No 1, Fiza, Aankhen, Main Hoon Na and Maine Pyaar Kyun Kiya.