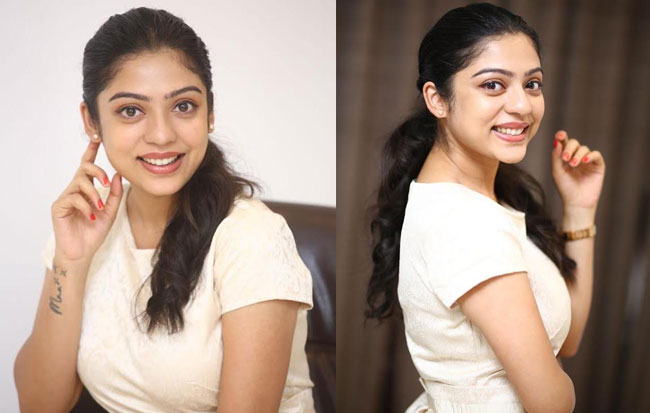 Young hero Bellamkonda Ganesh, light-hearted family entertainer ‘Swathimuthyam’ is arriving on 5th October. It is a small film arriving in the middle of two biggies like ‘Godfather’ and ‘The Ghost’. But the entertaining trailer and good promotional content has created a decent buzz on this film. Directed by Lakshman K Krishna, the film received a ‘U/A’ certificate. As a part of the promotions, the film’s heroine Varsha Bollamma talked to the media and answered various questions regarding her role, this movie, the production banner and future projects.

About The Story Of ‘Swathimuthyam’:

Though we may deal with the same theme as Vicky Donor for a brief portion of the film, Swathimuthyam is a proper family entertainer and a love story. The world of this film is entirely different. I am not allowed to talk much about it now but you’ll realise it when you watch it in theatres.

I always like stories that are closer to reality and there’s a lot of depth to each of the characters in Swathimuthyam. The treatment is refreshing. I am a small-town girl myself and I know how small issues too are blown out of proportion in villages. This is a story that most families will relate to and I could understand and fall in love with this world.

The film is an out-and-out entertainer and the star cast says it all. Veterans like Naresh, Rao Ramesh and Goparaju Ramana add so much life to the story. This is my second film with Goparaju Ramana garu after Middle Class Melodies. He brings so much energy to the set and brings a lot of nuance to his dialogue delivery.

Speaking about debut hero and the roles she want to do:

Ganesh is very much aware of the ways of the industry and filmmaking in general. He was never like a newcomer on sets and came prepared. As an actress, I want to do all kinds of roles but it seems that audiences like to see me in girl-next-door characters and they became more popular in my career. I would be game for a psychotic character too, something like Riteish Deshmukh in Ek Villain.

As much as I’m looking forward to the commercial success of my films, I want to be recognised as a performer who can pull off any role. I have never regretted any of my decisions. I am ambitious and want to be known for my acting chops, but being an A-lister or not isn’t within my hands.

When I met the director Lakshman K Krishna first, I was reminded of Middle Class Melodies filmmaker Vinod Anantoju. Both come from small towns and exude innocence and warmth. As a filmmaker, Lakshman comes with a clear head and is a good writer. I am quite confident about the film.

About working under Sithara Entertainments banner:

I don’t believe any banner will be called big just because they score commercial successes. Sithara Entertainments has a reputation because of its value system, the way they treat, respect people on set. Whenever my team is working on a film with such a banner, they’re thrilled about the work. They pay on time, and choose good stories and that has brought them this far.

On working in the Telugu film industry:

I am quite thrilled about working in Telugu cinema. I got a lot of respect here and since my debut, the industry made me feel comfortable. I never felt like I was working here, I come to the set with a lot of joy. I have entered films with Tamil cinema and did Malayalam films too but Kannada offers haven’t come my way. My next release will be Ooru Peru Bhairavakona alongside Sundeep Kishan.