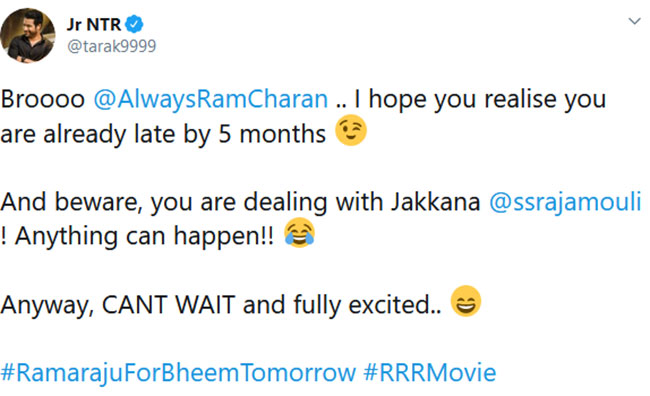 As we know, Charan released a small promo of what to expect from tomorrow’s #RamarajuForBheem video. He wrote, ‘Brother, here’s something to tease youâ€¦. @tarak9999. But unlike you, I’ll make sure to be in time.’ Jr.NTR is quick to reply to this tweet.

He wrote, ‘Broooo @AlwaysRamCharan .. I hope you realise you are already late by 5 months. And beware, you are dealing with Jakkana @ssrajamouli ! Anyway, CANT WAIT and fully excited..’

Tarak not only indicated that the video is late by five months but also made fun of Rajamouli and his perfection. It is good to see such a friendly rapport between both these heroes. While the fans of NTR are excited to witness the look of their hero in this prestigious project, film lovers are eager to see what SS Rajamouli has in store for them.