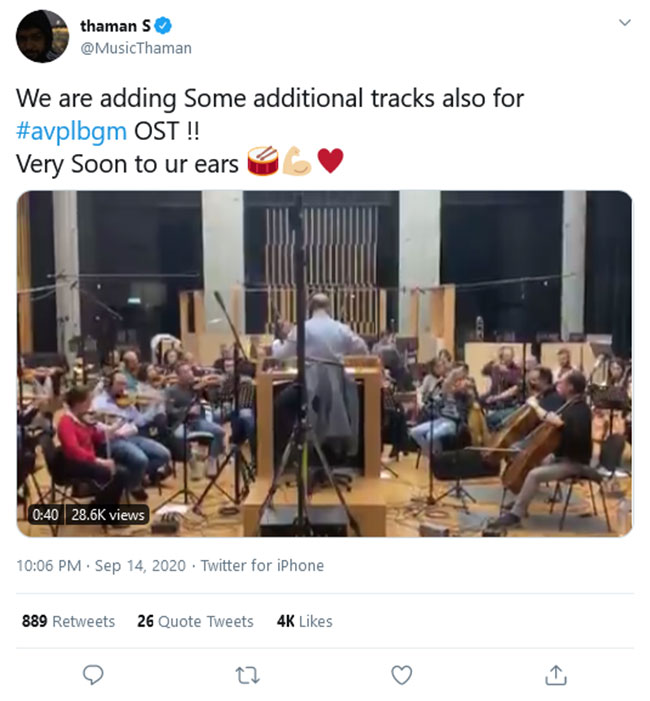 Stylish star Allu Arjun and star writer-director Trivikram Srinivas shattered all the existing records (non-Baahubali) with their third outing ‘Ala Vaikunthapuramlo’. This wholesome family entertainer was the biggest hit in 2020 and people fell in love with Trivikram’s narration and Bunny’s energy. It is safe to say that music played a very prominent role in the success of this film.

Starting from addictive tunes like ‘Samajavaragamana’ to chartbusters like ‘Ramulo Ramula’ and ‘Butta Bomma’, the album has everything and Thaman delivered his best work for this film. The background score too helped this film a lot. A lot of fans and movie lovers are waiting for Thaman to release the Original Sound Tracks (OST) of this film.

Thaman recently tweeted that the OST is getting released soon and some additional tracks which were composed but not used in the film will also be released. This came as a sweet surprise to fans of this film. The songs of this movie garnered 1.5 billion views across the youtube. Thaman is now busy working on various films including ‘Vakeel Saab’, ‘Sarkaaru Vaari Paata’ and others while Trivikram is making the script ready for this next flick with NTR.