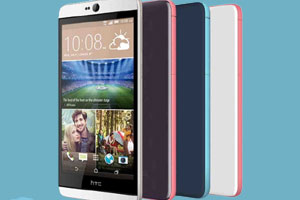 The pricing of HTC Desire 826 hasn’t been revealed by the company, but said that the device will first launch in China and then the other Asian markets in early 2015. The smartphone has already been listed as “Coming Soon” on HTC India website.

The 4G-supported Desire 826 smartphone will come in two variants (single-SIM and dual-SIM) depending upon the regions. The HTC Desire 826 runs Android 5.0 Lollipop with HTC Sense UI skinned on top and features a 5.5-inch full-HD (1080×1920 pixels) display.

The Desire 826 is powered by an octa-core (four cores at 1.5GHz and four cores at 1.0GHz) 64-bit Qualcomm Snapdragon 615 processor alongside Adreno 405 GPU and 2GB of RAM. It sports a 13-megapixel (f/2.2) rear camera with 28mm lens, BSI sensor, and LED flash. The front camera will be a 4-UltraPixel shooter. The 16GB of inbuilt storage on Desire 320 is expandable via microSD card (unknown maximum capacity).

(Also see: HTC Desire 320 With BlinkFeed and Quad-Core SoC Launched)
Connectivity options on the Desire 826 smartphone include 4G (dual-4G), Bluetooth 4.0, Wi-Fi, GPS/ A-GPS, and Micro-USB. The handset is backed by a 2600mAh battery. The thickness of the smartphone is 7.5mm and it weighs 155 grams. The Desire 826 comes in two-tone colours including White Birch, Blue Lagoon, and Purple Fire.