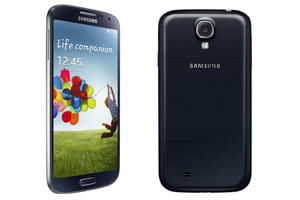 Samsung unveiled its new flagship smartphone – the Galaxy S4 – at a Broadway-inspired event at New York City. The fourth generation Galaxy S phone includes a number of improvements and enhancements over its predecessors – the Galaxy S III. A list of the highlights and specifications of the Samsung Galaxy S4.

– The Samsung Galaxy S4 will be rolled out with 327 mobile operators in 155 countries, from the end of April and will run Jelly Bean 4.2.2.

– There will be a 3G or 4G LTE version of the Galaxy S4. 4G LTE, will support up to 6 different band sets for global LTE roaming.

– The S4 will have a 1.9 GHz Quad-Core Processor or a 1.6 GHz Octa-Core Processor. The selection of the processor will be differed by markets.

– The phone will be available in 16/32/64 GB user memory options along with a microSD slot to support up to 64GB additional space.

– The Galaxy S4 is made out of polycarbonate and available in Black Mist and White Frost options. More colours becoming available later this year.

– The phone has a 13MP rear camera and a 2MP front camera. It also has a Dual Camera function for taking simultaneous photos and videos.

– Other camera features are Sound & Shot and Drama Shot. It also automatically creates a photo album with Story Album.

– Air View optimised for the Galaxy S4. Allows users to preview content by hovering their fingers.

– Air Gesture in the Galaxy S4 allows users to navigate the phone without actually touching it.