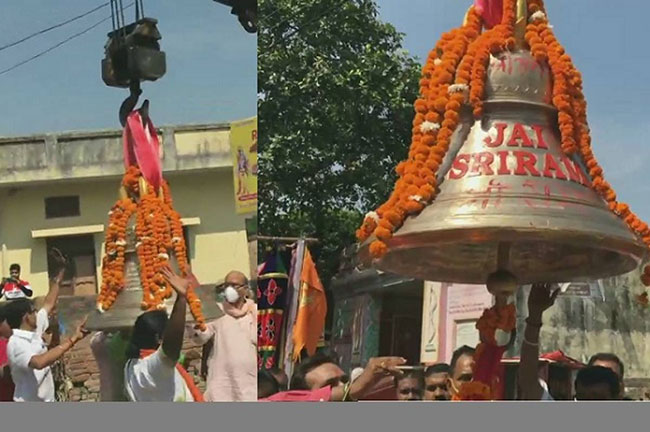 The Legal Rights Council, based out of shore city Chennai started a Ram Rath Yatra in September and the Rath Yatra came to a climax after reaching Ayodhya, where Ram Mandir is being constructed.

The Rath brought along a bronze bell emblazoned with “Jai Shri Ram” and weighing around 613 kg along with idols of Lord Ram, Goddess Sita, Lakshaman, Lord Hanuman, and Lord Ganesha for their installation in the grand Ram temple.

The Gigantic bronze bell that weighs about 613 kg is embellished with “Jai Shri Ram”. The Council members have also handed over the idols of Lord Ram, Goddess Sita, Lakshaman, Lord Hanuman, and Lord Ganesha to the trust members.

Rajlakshmi Manda herself drove the Rath Yatra and covered 4,555 km in 21 days. The Yatra passed through 11 states and reached Ayodhya from the holy city Rameswaram.

Talking about the yatra, Rajlakshmi Manda said, she is lucky enough to get the opportunity to drive the yatra vehicle and become the charioteer.