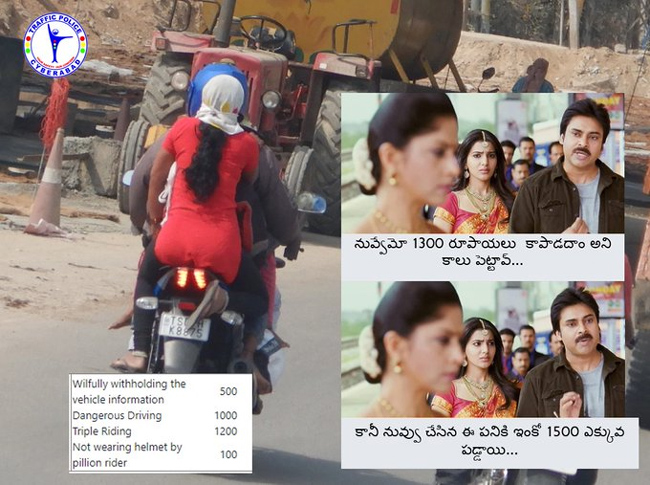 Pearl city Hyderabad is one of the metro cities that report a high accident percentage. Despite the Drunk and Drive tests and campaigns, the youth motorists won’t obey the traffic rules. To educate them about following the traffic rules and measures, the traffic police are using all the possible ways. Memes are the present phenomena that everyone will understand. The Cyberabad Traffic police have been using Memes as a new way to educate motorists.

Recently, the traffic cops have taken a picture of triple riding bike. To get saved from the e-challan a woman tried to hide the number plate of the bike. Despite failing to do so, her actions resulted in an extra challan for the bike.

The Cyberabad traffic police took to microblogging site Twitter to educate the motorists to not do such acts, which will make the scenario even worse.

The Traffic Police used the famous scene from Power Star starrer Attarintiki Daredi. Using the climax Railway Station scene, the cops showed their creativity and made a hilarious tweet.

The viral meme has gained the attraction of the netizens. The netizens showered praises on the traffic police for using their creativity to educate the motorists. To save Rs 1300, you use the foot, but this resulted in an extra Rs 1500 fine.

‘If you don’t want any challans, following the Traffic rules is the only best way. Escaping by doing stunts is not the best way,’ Traffic Police’s tweet in Telugu loosely translates