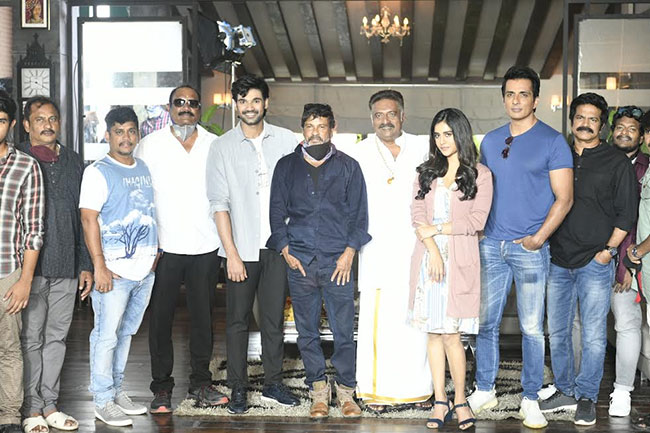 Renowned actor Sonu Sood who is known for his villain roles has turned out to be a hero in real life. He helped thousands of people who are in need during lockdown times and even helped a lot of immigrants to reach their homes. Sonu got a lot of goodwill from the public due to his kind and generous nature.

He recently joined the sets of Bellamkonda Srinivas and Santosh Srinivas’ ‘Alludu Adhurs’ which is a complete family entertainer. Srinivas scored a good hit with ‘Rakshasudu’ and has teamed up with ‘Kandireega’ fame Santosh Srinivas. This commercial entertainer is produced by Subrahmanyam Gorrela under ‘Sumanth Movie Productions’. Sonu Sood is playing a very important role in this film and he joined the team recently.

The last schedule of this film is going on currently in Ramoji Film City. The makers released a photo of the entire team together. It includes Bellamkonda Sai Srinivas, Sonu Sood, Nabha Natesh, Prakash Raj, Brahmaji, Satya, Srinivas Reddy, Kadambari Kiran, Chammak Chandra, Duvvasi Mohan, director Santosh Srinivas, Bellamkonda Suresh and a few others. Anu Emanuel is also a heroine in this flick but is not present in this schedule.

Music for this film is being given by star composer Devi Sri Prasad. Chota K Naidu is the cinematographer while Ram-Lakshman masters choreographed the fights. The film is expected to release during the first half of 2021.