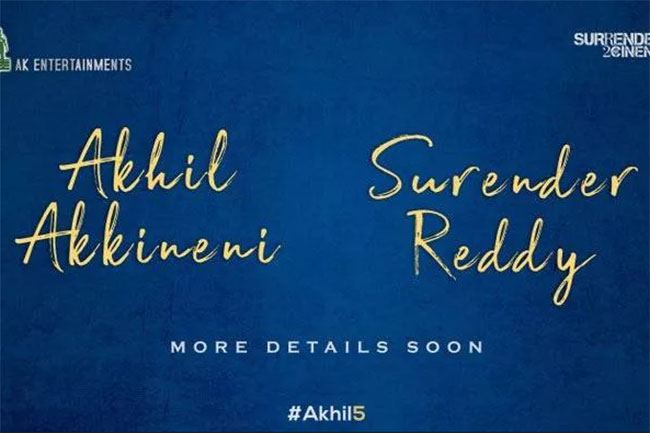 Akhil Akkineni who is currently working on ‘Most Eligible Bachelor’ has officially announced his next project. The handsome young hero will be teaming up with stylish director Surender Reddy. This project will be produced jointly by Anil Sunkara’s ‘AK Entertainments’ and ‘Surrender2Cinema’ banners.

Known for his wholesome entertainers like ‘Kick’ and ‘Race Gurram’, Surender Reddy is riding high on the success of magnum opus ‘Sye Raa Narasimha Reddy’. Well known writer Vakkantham Vamsi who gave stories for films like ‘Athanokkade’, ‘Kick’, ‘Ooseravelli’, ‘Temper’, ‘Race Gurram’ and many others is providing a powerful story for this film.

Surender Reddy is known for presenting his heroes in a stylish manner and Akkineni fans are expecting a lot from this combination. This will be Akhil’s 5th film and the young hero is going all out for this flick. The details about the cast and crew will be announced soon. The film is expected to go on floors next year and it is going to be made with a good budget.